Funny thing happened sometime in the past 18 hours or so. Burlington Free Press deputy editor (and Chief Assistant Gannett Cheerleader) Adam Silverman (a.k.a. @Wej12) blocked me from his Twitter feed.

I guess it was only a matter of time; I smack around the Freeploid pretty regularly, and he’s apparently the touchiest guy in the building. So, what finally broke the camel’s back?

Judging by the chronology, it was a series of replies I made to SilverTweets from the Newspaper Association of America “mediaXchange” conference in Nashville.

(Note the trendy non-traditional capitalization. That’s a sign of a desperate industry seeking new-century relevance. Kind of like when big corporations fill their Tweets with millennial slang like “bae” and “on fleek.”)

Silverman was liveTweeting from conference workshops. I couldn’t help but respond to some of them. First, a harmless jape:

@Wej12 @jeffsonderman There’s a Venn diagram with no overlap.

After that, Silverman sent a couple Tweets I found darkly humorous. First:

@Wej12 @AmPress Ah, so “emotional impact” is a commodity. Nice.

@Wej12 Ooh, @paulheintz would get a laugh out of that one.

A little background there. The Free Press is notoriously stingy with crediting other news organizations for original stories. Especially when it comes to Seven Days, which the Free Press likes to pretend doesn’t exist.

Anyway, I guess I stepped on some tender toes. Since then, I haven’t seen any Tweets from Silverman and I just discovered I’ve been blocked. So disappointing; I was learning so much from him about the joyless, soulless state of 21st Century Journalism.

Thanks to Governor Shumlin, this is a fact:

The [Brattleboro] Retreat is home to the Tyler 3 unit, the only child and adolescent inpatient psychiatric unit in Vermont.

It was Shumlin who wanted to decentralize inpatient services, despite his own experts’ call for a new improved Vermont State Hospital after Tropical Storm Irene. Now, any time we have a child or teen with severe mental illness, they’re off to Brattleboro.

The place where three teens have attempted suicide — two of whom died as a result — in the past 14 months. This comes to mind today because the family of one of those teens is suing the Retreat for negligence.

The patient in question tried to kill herself on May 5 of last year, by hanging herself over a door with a pair of jeans. The brief remainder of her life?

The teen suffered “serious, painful and permanent injuries” including strangulation, unconsciousness, cardiorespiratory arrest, lack of oxygen to the brain, prolonged coma, physical pain and suffering and eventual death, according to the family’s lawsuit.

These days, inpatient psychiatric facilities are carefully designed to eliminate ways for a patient to harm him/herself or others, which is always a high risk. Furniture is soft and rounded, large items are built-in or bolted down, no sharp edges or blunt implements or long ropey things allowed, doors are angled downward so you can’t, say, hang yourself over one of them. Every possible precaution is taken.

The Retreat has, to put it mildly, a checkered history for diligence in patient care. Not to mention financial and administrative competence. And every time there’s a screwup, we hear the same refrain: We’re making improvements, we’ve got a plan, we’ll make things better.

On behalf of every troubled child or teen in Vermont, I sure as Hell hope so. Every tragedy is another black mark on the Retreat’s record — and on the Governor’s.

Now, I know the old VSH had its own troubled history, but its problems were largely in the past. A new State Hospital could have provided a state-of-the-art facility and an expert staff, almost certainly for a lower cost than the current multi-site system. The Governor wanted a decentralized system and ignored the advice of his own people in the field. Now he, and we, are stuck with the Brattleboro Retreat. Let’s hope they make it work from now on.

There was a bunch of stuff going on at the Statehouse on Friday. The gun bill was moving through the Senate Judiciary Committee; two House committees were mulling possible taxes to pay for an improved health care system; and all committees were rushing to meet the crossover deadline for non-financial legislation.

To me, the most important thing going on — well, the thing with the biggest potential long-term impact — happened before the Senate Finance Committee, which heard testimony about systemic problems with Vermont’s tax system, and how they contribute to our current fiscal mess.

In a nutshell, a major part of our budget trouble has to do with a narrow tax base for our income and sales taxes, and sales tax revenue lost to the rising tide of Internet retail. And we’re not talking a jot and a tittle; we’re talking tens of millions in foregone revenue.

In other words, if our tax system were up to date, our budget would only need a little tweak instead of major surgery. And the Democratic majority wouldn’t be constantly scouring for ways to scare up some additional money; it’d be flowing in just like always, enough to cover our expenses.

You can see why I wanted to be there.

Senate Finance chair Tim Ashe (D/P-The Big City) called the hearing because of his concerns over our creaky tax system.

“This discussion is about realignment of our tax structure in line with how our economy works today. …We need to be thinking about the future. It’s not about taxing Vermonters out of the state or any of that; it’s saying, how do we avoid an annual crisis management approach? It’s not about taxing this or that person more or less; it’s, are we taxing the right things? Once you determine that, then you determine the rates that are fair and reasonable.”

As part of this work, the committee is taking a fresh look at the fabled 2011 Blue Ribbon Tax Commission’s report, which I’d thought had been relegated to the Dustbin Of Perpetual Ignorage. The commission had some pretty sound ideas for a better tax structure — but ideas that promised to raise many a hackle in the Statehouse.

Among many other things, the Commission called for imposing the sales tax on most services as well as goods, and repealing many sales tax exemptions. This would allow for a 1.5 cent cut in the sales tax rate. On the income tax, it recommended moving to Adjusted Gross Income as the definition of taxable income, plus the elimination of pretty much all tax deductions. Tax rates would have been adjusted downward to make the changes revenue-neutral; but it would have made for a much simpler and fairer income tax system. If Senate Finance is resurrecting the report under Ashe’s leadership, then that’s a good thing as far as I’m concerned. 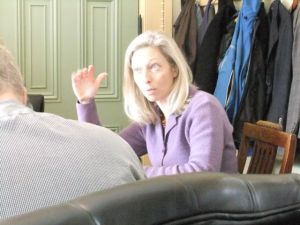 Sara Teachout of the Joint Fiscal Office presented a series of charts highlighting portions of the tax system; all are available online here.

On the sales tax, she showed that American consumption patterns have reversed in the past six decades. In 1952, 60% of our consumption was in goods and 40% in services. Today, goods consumption has fallen to roughly 35%, with services up to 65%.

You can see how that would create a problem, when your state’s sales tax is applied only to goods.

And then there’s Internet retail. It was about 0.5% of total retail purchasing in the year 2000; it’s up to 8% now, $80 billion annually nationwide, and seems certain to continue its inexorable rise.

You can see how that would create a problem when there’s no structure to enforce state sales tax on Internet retail. And the Internet is a double whammy for Vermont’s economy and tax collections; not only is there the direct impact of lost sales tax revenue, but there’s the broader impact from lost retail sales at local brick-and-mortar stores. That means less economic activity, plus fewer jobs and lower incomes in the retail sector.

Ashe estimates the loss in sales tax revenue at about $50 million per year. Please note: this is not new revenue; this is revenue we used to take in but we’ve now lost. As the Senator puts it:

We get blamed for overspending, but $50 million would have just been coming in. Instead, we have to fill the gap. That’s the part where we keep raising revenue and people say, ‘Why are you doing that?’ It’s not a desire to raise taxes; it’s a replacement strategy.

Now let’s look at the income tax. Vermont has one of the narrowest income tax bases in the country because of the way we calculate taxable income and our generous rules on tax deductions. As I’ve noted earlier, the average million-dollar earner in Vermont claims more than $500,000 in deductions. Nice work if you can get it.

A proposal now before a House committee would cap itemized deductions at 2.5 times the standard deduction. This would substantially increase taxable income for top earners, and generate more modest tax hikes for the upper middle class. Total revenue is estimated at *.

*Correction: I misread the source for this figure. It’s actually about $15 million per year. It’s part of a proposed House tax package that would raise $35 million.

I may be more of a policy geek than the vast majority of Vermonters, but perhaps you see why I’m so interested in this work.

Sen. Ashe is not necessarily in favor of the itemized deduction cap; he would prefer a broader, deeper consideration of Vermont’s tax structure.

What I would not want to do is have the House and Senate entertain that, and then have that not be satisfactory to put us on a sustainable path, and have to do something else very substantial a year or two later. So the question is, can you configure our revenues in a way where we won’t have to come back for a while? Can we buy 20 years of revenue structure with what we do next? That’s the thing that’s important to me.

Philosophically, I don’t like the radio-dial approach that most legislatures take, which is ‘This year we go up a little, next year we go down.’ Predictably is worth something.

Indeed, Ashe predicts that the preponderance of this year’s budget-balancing will come in spending cuts, not revenue hikes. That’s mainly because of a timing issue built into the system: spending cuts take effect right away, while changes to the tax code take months — up to a full year, in fact — to take effect and start generating new money. But in spite of this year’s very crowded legislative agenda, he is hoping to clear the groundwork for a full consideration of tax issues in the near future:

I would like the [Finance] Committee to do what it can to choose a path this session. That path may be articulating what the future ought to look like, as the Blue Ribbon panel did. Maybe not in the same way, but to say, ‘This is what we intend to do, the broad outline of a tax structure for the future,’ take it on the road, let it get beat up a little bit, have it evaluated by others, and come back next year.

Go big, or go home. I wish him the best in his endeavor, which does seem awfully optimistic and (dare I say it) progressive. On the other hand, I wouldn’t want his best to become the enemy of the good; if there are positive steps to be taken this year, and I see the deduction cap as an obvious positive step, then I don’t want to put it off in hopes of getting pie in the sky next year.