Ohh, this is sad, even by Burlington Free Press standards.

Last Friday, the Gannett newspaper chain announced its “Best of Gannett” awards for the company’s best journalism in 2014. Among the big winners were the Arizona Republic, the Des Moines Register, the Palm Beach (CA) Desert Sun, and the Staunton (VA) News Leader.

This being a media awards thing, there were dozens upon dozens of winners. (Journalism awards are kinda like participation ribbons. I speak as a past winner of dozens myself.)

So where, oh where, can the Freeploid be?

Okay, there. The Free Press’ one and only prize is a Third Place award in the category of “Narrative Writing/Voice,” which aims to honor “powerful and tightly written news and feature stories… and any examples of evocative writing regardless of platform.”

And your winner? Oh, this is embarrassing.

Yes, the Tim Johnson who was abruptly fired last fall after 16 years on the job.

Gee, somehow the Free Press never bothered to report this great victory. And it’s usually so quick to brag about any honor it wins, no matter how trumped-up.

Postscript. I’ve heard through the grapevine that Johnson learned of his award through this blog. Nobody at the Free Press or Gannett bothered to inform him. That’s not just sad; it’s shameful. Even if the Free Press was going to keep the check, they could have at least given him a certificate or something.

Post-postscript. A commenter notes that I made a mistake in reading the Gannett press release. The newspapers do pocket the cash for the Public Service awards, but the writing and reporting prizes are supposed to go to the individual staff. Presumably the Free Press will be scheduling a nice presentation ceremony for Johnson. Hahahaha.

Under our system of government, the legislature enacts laws and the executive implements and enforces them. But what happens when a law targets the state itself, and the state fails to obey the law? 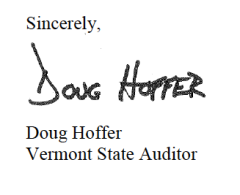 Don’t mess with the Hoffer.

This existential question arises from a new report from Auditor Doug Hoffer (who has an appropriately awesome, take-no-prisoners signature) brings us an example of a self-inflicted U.M. It involves Act 40, a bill that became law during Peter Shumlin’s first year in office. Act 40 was a nobly-intentioned piece of legislation that required each state entity to cut its energy consumption by five percent per year.

Great, no? The state leads the way on energy efficiency, providing an example for us all. Except that, according to Hoffer, Act 40 is nothing but an empty shell, its efficacy unknown and unknowable.

— The state ” had limited information regarding whether, and the extent to which, its focus on reducing energy consumption resulted in reductions consistent with its goals.”

— Not all state agencies prepared energy-reduction plans required by the law.

— Key terms in the law were left unclear. For instance, Act 40 called for “right-sizing” state vehicles, but “right-sizing was not defined” and no criteria were established.

— Energy use in leased space was not included in evaluating Act 40 performance. In 2012, leased space accounted for 20% of building space managed by the Department of Buildings and General Services. There’s a big loophole.

— “State government energy consumption has not been reported since 2011, and the results reported prior to 2011… contained data and formula errors and had methodological flaws…”

Put it all together, and we seem to have a clear picture of administrative failure that undermined a very good piece of legislation.

Buildings and General Services Commissioner Michael Obuchowski acknowledged many failings in his formal response to Hoffer’s audit. He pleaded, surprise surprise, poverty. He says that the state needs an energy management division to implement Act 40 but there’s no money for such an entity. In the meantime, he says, “BGS will continue to provide these services to the best of its ability.”

Judging by past performance, there seems to be an ability gap.

Obuchowski and Hoffer both say that some improvements are already underway. But why did it take an audit to make the state’s energy management system even attempt to follow the law?

If this was a private entity flouting the law, we’d be going after them guns a-blazing. But how do we hold the state to account for ignoring its own statute?

(And, once again, what does this say about the administrative competence of the Shumlin administration?)