Almost two weeks ago (Feb. 26, to be precise), the House Health Care Committee held a hearing on the health impacts of sugar-sweetened beverages. There was an interesting name on the guest list: Lisa Katic, registered dietician.

Registered dietician speaking on behalf of the American Beverage Association, the trade group that includes Coke, Pepsi, and other mass-market sugar peddlers.

Seems like an odd juxtaposition: a professional dietician talking up sugary beverages.

Sold my soul for a Beltway consultancy.

Which led me to take a closer look at Lisa Katic. Basically, she’s the #1 dietician-for-pay for the food industry. She has her own DC-based consultancy firm, and her clients include the American Beverage Association, the Snack Food Association, and the Grocery Manufacturers Association.

Before she hung out her own shingle, she was on staff at some of the largest Big Food interest groups in the country. In short, she’s made a very lucrative career out of selling her professional credential to the highest bidders.

Further down the page, I’ll tell you about a fascinating talk she gave in 2009 before an industry group. But first, her testimony to our humble legislative committee, delivered by speakerphone.

Her carefully curated pitch: Obesity and diabetes need to be addressed, but taxing a single class of food will do nothing to prevent the twin scourges of the American way of eating. Which ignores a growing body of evidence that beverage taxes do, indeed, have a pronounced and immediate impact on consumption. See, for example, the first year’s returns from a beverage tax imposed in early 2014 by the Mexican government. (Katic brushed off a question about Mexico’s experience, claiming not to have “seen specific data.”)

Not to mention the obvious effects of tobacco taxes: price goes up, consumption goes down. It’s a pretty clear and direct link.

Her next pitch: Sugar-sweetened beverages are one small part of the problem, accounting for “only six percent of the calories in our diet.” Which may be true, but I’ll bet you dollars to (ahem) donuts that sugary drinks would figure much more prominently in the diets of our overweight population.

Katic also parroted the party line in saying that the real problem is the “severe imbalance between calories consumed and physical activity.” This is straight out of Big Beverage’s PR strategy. See its “Mixify” campaign, which touts a balanced approach to life including the occasional shot of sugary drinks. And which is full of buzzwords aimed at millennials: “the deets,” “#Realtalk,” “emoji,” “that bod of yours,” Mixify is your “balance wingman.”

Her point is true, but she undercuts her own argument by saying that a modest reduction in calorie intake, plus more activity, can make for a healthy lifestyle. For sure. But the flip side is that cutting out the soft drinks would have a modest effect per day and a massive impact over time.

Immediately following Katic’s testimony, the committee heard from Kelly Brownell, one of the nation’s leading experts on the subject, a former Yale prof who’s now a dean at Duke University. He hadn’t heard Katic, but he pretty much knocked her “facts” into the nearest trash bin. He pointed to “very strong scientific evidence tying added sugars to obesity and diabetes.” He said a beverage tax “makes all the sense in the world,” because “the largest percentage of added sugar comes from sugar-sweetened beverages.”

In other words, it might be only six percent, but that’s a huge part of the problem and a very simple fix.

Brownell also testified about research indicating that sugar may have the same effect on the brain as “traditional substances of abuse,” triggering increased tolerance and need for sugar, plus withdrawal symptoms.

And he cited economic projections showing that an increase in beverage prices would, indeed, reduce consumption.

In 2009, Lisa Katic gave a talk to the National Institute of Animal Agriculture, a subset of Big Agriculture. She was there to provide an overview — a sort of “know your enemy” briefing — of the top activists opposing the interests of Big Food. (Audio of her talk can be found on Swinecast, an appropriately named podcast service of the pork industry.)

One of her targets was Kelly Brownell. She said he’d been “instrumental… in drawing parallels between the food industry and the tobacco industry” in their response to rising health concerns. Deny, delay, and deflect, basically.

In discussing Brownell, Katic told her Big Ag audience that “there are people who want nothing more than to line up CEOs of food companies or commodity groups and haul them in front of Congress and be able to grill them like they did with the tobacco companies.” And, she concluded, “Kelly Brownell is one of those people.”

Which, in her mind, is a bad thing. You can draw your own conclusions.

Katic’s other targets included Marion Nestle, Michael Pollan, Alice Waters, and Eric Schlosser. She lamented the fact that Schlosser’s book “Fast Food Nation” is required reading in some college courses, “which is a problem.” In discussing Waters, she mispronounced the name of Waters’ groundbreaking restaurant — “Chez Panay.” And she even slammed the American Dietetic Association; of one of its subgroups, she said, “They’re not always talking about sound science.”

Katic’s definition of “sound science” is analogous to that of climate-change deniers. Nothing that threatens her clients’ interests is absolutely proven, the real problem lies elsewhere. She’s smart enough to acknowledge problems with the American diet, but she’s bought and paid for enough to try to deflect attention elsewhere.

When Katic testified before the Health Care Committee, she was billed as a representative of the American Beverage Association. But committee members seemed unaware of the depth of her ties to Big Food, or her career-long track record of defending the interests of her paymasters. She is a very well compensated mouthpiece for Big Food, Big Beverage, Big Snack, and Big Agriculture, and her testimony should be evaluated in that light. 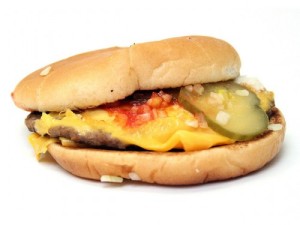 Any kale with that?

Sad to say, but it looks like Vermont’s favorite vegetable may have jumped the shark.

McDonald’s will debut kale as an ingredient in the not-too distant future as the fast-food giant continues its efforts to adapt to changing consumer preferences, according to a recent note from Janney Capital Markets.

“Possibilities include kale for use in salads, or perhaps a kale smoothie,” wrote Janney analysts in a note to clients. “More generally, McDonald’s clearly aims to raise consumers’ perception of the quality of its food. Adding kale to the menu in some way could help be a step in this direction.”

See, Mickey D’s has a problem. More and more Americans are realizing its food is shit, so they need “to raise customers’ perception of the quality of its food.”

Please note: not necessarily the actual quality… just our perception of it. And McDonald’s has no idea what to do with kale; it just wants to do something.

Kale, thanks to Bo Muller-Moore and foodies everywhere, is a powerful image shaper. Sure, it’s nutritious and all that; but its most potent effect is on “customers’ perception.” You wouldn’t get the same bang for your buck from chard or arugula or collards.

One franchisee’s director of operations said adding kale was a good move for McDonald’s, which continues to battle negative trends domestically.