“When you work in this building long enough, you notice things like thread count.”              — Anonymous Statehouse scribe

The House Ways and Means Committee heard a full morning’s worth of testimony today on the proposed sugar-sweetened beverage tax. The most interesting witness, not in a good way, was one Kevin Dietly of Massachusetts-based Northbridge Environmental Management Consultants, speaking on behalf of the beverage industry. He definitely had the fineest suit in the room, not to mention bright pearly-white teeth. (Oh, and a Google search indicates that he’s a member of the Chautauqua Yacht Club. Must be nice.)

And he acknowledged, in answer to a question from the committee, that he has represented the food and beverage industries since 1986.

Dietly managed to actually travel to Montpelier, unlike his fellow soulless industry flack Lisa Katic, discussed previously. I don’t imagine it was a sacrifice for ol’ Kev, since he presumably drew full expenses and a fat hourly rate for his visit to Montpelier. (He stuck around for the full morning, billable to “Stop The Vermont Beverage Tax.”)

(This wasn’t his first trip to the Statehouse; in 2013 he testified for the beverage industry against a proposed expansion of Vermont’s Bottle Bill. Surprise, surprise.)

His testimony was a carefully-crafted web of industry-friendly statistics and studies, plus back-handed dismissals of the academic experts who’d preceded him in the witness chair. You know, the economists, doctors, public health experts and nutritionists who have consistently found that…

— Sugar-sweetened beverages are a scourge of the American diet, leading to high rates of obesity, diabetes, and other severe illnesses.

— Lowering consumption of sugary drinks will have a beneficial impact on public health and public-sector healthcare spending.

— The impact on employment is neutral to mildly positive. Consumption of sugary drinks goes down, but people buy other stuff instead.  The equation balances out. Plus, the tax revenue funds jobs in government or the healthcare sector.

Pish-tosh, said Dietly, slamming “academics” who live in “a different world,” a “theoretical world.” When they retreat to their “ivory towers, things get a little wacky.”

Welp, so much for scientific research. Can’t trust anything they say.

As for Mr. Dietly, when you Google his name you get a massive quantity of testimony before various legislative bodies around the country on behalf of the food and beverage industries. Here’s a sampling of The Expensive Wisdom of Kevin Dietly:

He spoke to a New York Senate committee in 2010 in opposition to a proposed beverage tax. His arguments were essentially the same, then and now: a beverage tax would have disastrous economic consequences (but he entirely leaves out the fact that consumers will substitute other items for taxed beverages, thus mitigating the dreaded financial and employment impact), and it wouldn’t have any effect on public health (carefully selected statistics cited, inconvenient ones waved away).

In 2012, California voters faced a ballot measure to require labeling of foods that contain GMOs. (The measure was defeated after a very costly “No” campaign bankrolled by Big Food.) And oh looky here: Kevin Dietly was a hireling of the “No” campaign, and offered a very high estimate of the cost of GMO labeling — as much as $400 per year for each California household. His estimate was based on the assumption that producers would universally switch to costlier ingredients in order to avoid the GMO label (a dubious assumption at best), although he admitted that “We certainly don’t know what will happen.”

Speaking to Nevada lawmakers in 2011 on the subject of recycling and bottle deposits, Dietly positioned the beverage industry as having been “among the leading packaging innovators of the past 100 years,” and touted the industry as supporting a range of programs “to promote recycling.” And then he makes forceful arguments against deposit laws. If you read through his testimony, there are striking parallels in method, style, and type of argument with today’s testimony against the beverage tax.

In 2014 he addressed Connecticut lawmakers about a proposal to expand the state’s bottle bill. He asserts that it would impose unbearable costs on manufacturers and retailers, and had the audacity to depict the deposit/refund system as “counter to the goals of sustainable recycling and materials management.”

In 2002 he spoke before a U.S. Senate committee (chaired by Jim Jeffords) which was considering a “Beverage Producer Responsibility Act.” The concept of “producer responsiblity” has been a mainstay of advancement in environmental law; in Germany, for instance, producers have cradle-to-grave responsibility for their products — from bottles to automobiles. Its economy seems to be getting along just fine, no?

I could go on, but you get the idea. Kevin Dietly is a well-traveled, amply-compensated spokesflack for the beverage industry, fighting for its interests in legislative halls around the country. His testimony should be judged accordingly.

This should have been a good day for the sugar-sweetened beverage tax. State lawmakers were unconvinced by Governor Shumlin’s proposed payroll tax, and many had turned to the beverage tax as a way to help close the Medicaid cost gap. Today, the House Ways and Means Committee is considering the beverage tax, and advocates on both sides are pointing to this hearing as a key moment.

(Last year, the beverage tax passed the House Health Care Committee but died on a close vote in Ways and Means. Things were looking better for the tax this year.)

But wait, what’s this? Shumlin’s posse has come riding over the hill with a revised payroll tax plan that, according to VPR’s Peter Hirschfeld, “looks to have new life” in the Health Care Committee. Fortuitous timing, neh?

The new plan is friendlier to business, cutting the payroll tax rate in half and eliminating an employer assessment on businesses that don’t offer health insurance to their workers.

Chief of Health Care Reform Lawrence Miller says the smaller tax would generate enough money to pay for Shumlin’s plan to close the Medicaid gap. Which makes me wonder how he can now accomplish this with less than half the revenue of his original plan. What got cut?

We’ll find out soon enough, as the Governor’s new plan gets an airing in legislative committees. But its very introduction may well be enough to throw the beverage tax, once again, into the dumpster.

In January of last year, the supposedly nonpartisan Campaign for Vermont raised a stink about conflict of interest in the Vermont House. Specifically, it accused then-Rep. Mike McCarthy of same.

Then-CFV spokesflack Shawn Shouldice noted that McCarthy, an employee of SunCommon, had voted for a net-metering bill in the House… a bill that stood to benefit his employer. Shouldice accused McCarthy of breaking House rules by voting on the bill.

Fast forward to today, when the House approved a massive energy bill going under the name RESET. One provision was struck from the bill; it would have boosted funding for Efficiency Vermont. The charge to strike that provision was led by Independent Rep. Adam Greshin. All of this is chronicled very nicely by VPR’s Peter Hirschfeld. Except for one small fact: 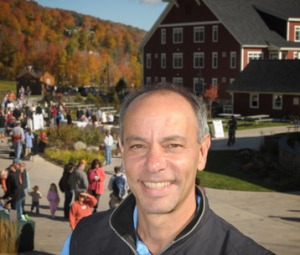 The ski industry is a voracious consumer of electricity.

Efficiency Vermont is funded by ratepayers, with rates approved by the Public Service Board.

Do I need to connect those dots?

The Efficiency Vermont cut would reduce utility rates; Greshin’s business would directly benefit. Not only did he vote for the measure, as in McCarthy’s case; he spearheaded it. He pushed strongly for it as a member of the House Ways and Means Committee, where his arguments carried the day.

In the interest of nonpartisanship, I ask Campaign for Vermont to raise the same kind of stink about Greshin that they did about McCarthy. Also, is to too much to ask our media to report obvious connections when a lawmaker sponsors legislation that would benefit his/her own interests?