You do remember Meg Hansen, the far-right ideologue who’s being paid to craft messaging for the Vermont House Republicans?

Yeah, she just blocked me on Twitter. She’s also blocked at least one prominent Democrat who had presumably given her some blowback for her obnoxious, Christianist Tweets. Which must be a bit of an embarrassment to a VTGOP trying to hold onto a fig leaf of mainstream credibility.

Well, here’s one more embarrassment: the last Tweet I shall ever see from the keyboard of Ms. Hansen. 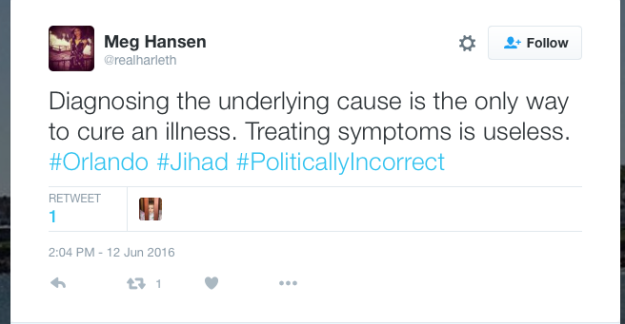 Oddly, her diagnosis of the “underlying cause” has nothing to do with homophobia.

Let’s see. An attack on a gay nightclub, and homophobia is not a factor? Not even a little bit?

If the Vermont Republicans had any sense of decency or proportion, they’d disassociate themselves from this little cauldron of hate. Or at least stop paying her for “strategic communications.”

And a note to my readers: If you follow Hansen’s Twitter feed, feel free to pass along screengrabs of her future literary efforts. Me, I’m cut off.

She’s so brave, standing up to Islamic extremism via Twitter and proudly labeling herself “Politically Incorrect.” And fearing the consequences if the likes of me can actually read her stuff.

17 thoughts on “Tweetblocked by Meg Hansen”