September 3, 2014: Vermont’s bookstores are certain to crack open their doors at the stroke of midnight, in anticipation of an overwhelming response to Jim Douglas’ three-years-in-the-making autobiography. Yeah, it’ll be just like the Harry Potter release crowds.

Well, maybe not. But while we still have almost three months to wait for St. Jim’s tome, we have gotten a gander at the cover. 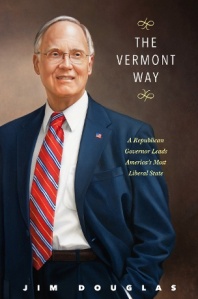 The picture, title and subtitle, taken together, paint a broad-stroke portrait of arrogance in exile.

The image, Douglas in a suit w/obligatory flag pin, is a reproduction of his official state portrait. Next to him is the title: “THE VERMONT WAY.”

The unspoken, but clear as day, message: Jim Douglas is the embodiment of the Vermont Way. He is the quintessential Vermonter, the carrier of Vermont values into a new and uncertain century.

And then the subtitle: “A Republican Governor Leads America’s Most Liberal State.” Underscoring what, I fear, will be one of the book’s central messages: Jim Douglas was a uniquely talented politician — the only person who could lead a constituency largely inimical to his party’s policies.

Which omits the fact that Vermont wasn’t nearly as liberal when Douglas took office as it was when he departed. During his eight years as Governor, the Republicans lost ground everywhere else in state government. By the end of his tenure, he could do little beyond castigating the Democrats for overriding his vetoes and ignoring his wise counsel.

Douglas definitely deserves some credit for passing a conservative camel through the eye of a liberal needle. But doesn’t he also deserve blame for the leftward shift of Vermont politics while he occupied our highest office? Doesn’t he deserve blame for leaving his party in shambles, with scant resources, no grass-roots organization, and a nearly complete lack of up-and-coming talent?

And doesn’t he deserve blame for leaving a legacy so pitiful as to be virtually nonexistent? How did he shape Vermont politics during his tenure, and how have his policies influenced post-Douglas political discourse? The answer, it seems to me, is not very much at all.

So he managed to “lead” America’s most liberal state, if only in the sense that he occupied the corner office. But while he was Governor, and even more so since he retired, his state did not follow him. In fact, it moved steadily in the other direction. It’s a severely limited kind of “leadership.”

As for the book cover’s visual equation of Jim Douglas with The Vermont Way… well, if that were true (which it’s not), we’d be well and truly fucked.

1 thought on “Oh, what the hell. Let’s judge a book by its cover”