Who wasn’t there? Well, as far as I could tell, Barre’s Republican Mayor Thom Lauzon wasn’t there. And he usually manages to make himself conspicuous wherever the cameras gather. Interesting. I seem to recall Paul “The Huntsman” Heintz reporting that Lauzon and his wife donated $2,000 to the Governor’s campaign.

Checking… yes, yes he did.

Still, the front section of the library, comfortably air-conned, was full of Milne supporters and the legions of media desperately looking for a sure-fire story during the summer slump.

Milne was introduced by Douglas, who gave Mr. Bunny a hearty endorsement after delivering what sounded very much like a statement for his own candidacy. (Must’ve made a few hearts flutter in the Republican audience and wish for What Might Have Been; Douglas is their Beau Ideal.)

Douglas lauded Milne’s experience in “the real world” of business and commerce, a person “outside the bubble, unaffected by the stale air of the State House.” That’s rich, coming from a guy who spent virtually his entire adult life in that very bubble.

And then the Man of the Hour stepped to the plate, promising “a campaign of ideas” and said that he would “not be vilifying the Governor.”

In the following few minutes, Milne used these words in direct or indirect reference to the incumbent: doubting that Shumlin’s course is “responsible and realistic,” calling the Governor’s agenda “ultra-progressive,” referring to Shumlin as “headstrong about the need for exuberance and rapid, radical change,” characterizing his Administration as one of “unbridled experimentation,” and decried the use of “bullying tactics” and “brazen displays of power.”

But he won’t be “vilifying” the brazen, bullying, headstrong, radical, ultra-progressive Governor. Bwahahaha.

By contrast, Milne depicted himself as moderate, “cautious,” “responsible,” and reluctant to make any wholesale changes. He said “cautious” a bunch of times.

The strategy, thus, becomes clear: in order to capture the center, Milne will go all-out to portray Shumlin as a fire-breathing radical. Without, of course, vilifying him in any way.

It’s hard to see this working. Shumlin has too many centrist positions, spends far too much time courting the center, and caters to the business community far too often to be convincingly marginalized as an “ultra-progressive.” (When he said that, I could almost hear the guffaws exploding from Prog Central: “Shumlin a progressive? You must be joking!”) 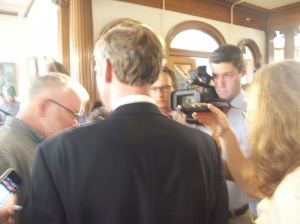 After his speech, his crew made their way to the Elks Club next door for a hamburger lunch. It took Milne a while to get there; he first had to submit himself to his inaugural media scrum. The key point for me was the inevitable exchange about Act 250, given his frustration and anger over the regulatory troubles facing his dream project, the mixed-use Quechee Highlands development. It’s run afoul of the regional Act 250 board and the town of Hartford.

Milne claimed that he is “very supportive of the concept of Act 250,” but then accused Shumlin of “hijacking something into a political ideology rather than a practical program that needs to be applied more pragmatically.”

Not exactly grammatical, but you get his drift. But when asked for specifics on how the Administration had hijacked the process, Milne came up short of the mark:

Not much meat on those bones, is there? He charges the Administration with “hijacking” the process — an aggressive power grab — and all he can offer as proof is a nonspecific charge of “poor management.”

Hey, a travel agent ought to know that it takes positive, organized action to hijack anything. You don’t do it by accident.

All in all, it was a happy event for the true believers. But if this is the tack Milne plans on taking, he’s gonna get shellacked by the Governor.

It may be the offseason for lawmaking, but there’s still some occasional activity under the Golden Dome. Yes, even aside from the well-chronicled bats in our communal belfry.

Yesterday brought a hearing of the Joint Corrections Oversight Committee. On its agenda: State Auditor Doug Hoffer’s audit of the Sex Offender Registry, which found an 11% rate of “critical errors.” Which triggered a requirement in state law that the Registry must receive a “favorable” audit before the state can start posting home addresses of offenders. Which triggered yesterday’s committee meeting.

Okay, what do you think? Is an 11% “critical error” rate is a “favorable” result?

According to VTDigger’s Laura Krantz, most of the committee also thought not.

Rep. Sandy Haas, P/D-Rochester, said the committee should put in writing that the audit is not favorable. Rep. Bill Lippert, D-Hinesburg, agreed.

Seems simple enough. Ah, but then Senate Judiciary Committee chair Dick Sears runbled into action. Or should I say, inaction.

Sears… said to admit the audit is not positive could create fodder for a lawsuit from a defense attorney. He also worried a judgment would be binding and perhaps require another audit before the addresses can go online.

Dick Sears, who gets a lot of credit in State House circles for being a wise old hand, does this a lot. If any idea comes up that might possibly create some legal bills for the state, he puts his foot down. And so, the Joint Committee “declined to pass judgment” on whether the audit was favorable. Thus ignoring plan old common sense and, if you ask me, the requisites of justice.

Because although the vast majority of the problems uncovered in the audit have been fixed, the system remains flawed and is virtually certain to start pumping out fresh errors.

And what if we start publishing home addresses and a non-offender winds up on the list complete with home address? Or if an offender’s listed home address is wrong? Those are critical errors that could lead to disrupted lives, communities in turmoil, or even vigilante justice.

I don’t know where the Legislature goes from here. There’s clearly an appetite for posting home addresses, but there’s an obvious need to make the Registry as mistake-proof as humanly possible before that step is taken. And there probably isn’t much of an appetite for a better system that’d probably cost more money. So I guess they’ve bravely kicked this can down the road. Thanks to the “leadership” of good old Dick Sears.

Lately, there have been signs aplenty of passengers taking their leave of the Good Ship Moderate Republicanism, helmed since last November by Captain Phil Scott and first mate “Super Dave” Sunderland. Or maybe Scott’s the admiral and Sunderland is captain, whatever works.

Scott and friends came away from last November’s VTGOP meeting with a rather conditional mandate to broaden the party’s base. Make it more attractive to moderate and undecided voters, and the pragmatic business types who’ve made their peace with the Democrats under Governor Shumlin.

It seemed a promising direction. Indeed, the only possible direction, since the Vermont electorate wasn’t suddenly going to turn Texas red. The conservative VTGOP of “Angry Jack” Lindley et al. had hit a glass ceiling at about 35% of the vote.

But it was going to be a tough job for Scott, previously not known for his willingness to tackle tough jobs. He was, by dint of his elective office, the only person who could credibly take it on; but he also, by dint of his personality, seemed unsuited for the task. And even if he rose to the occasion, the odds seemed to be against him. Shumlin and company have done a really good job of co-opting the center, and it’d be a hell of a job for Scott to win back all those voters and supporters without moving so far to the center that he completely alienates the easily alienated conservative base.

It’s only been about nine months, and the Good Ship Moderate Republicanism looks to be taking on water. Recent signs include:

— Bruce Lisman’ decision to forego any sort of alignment with the VTGOP, even after he stepped away from leadership of Campaign for Vermont, the self-described nonpartisan policy shop.

— Lisman’s brief and pointless flirting with a run for Governor this spring, which lasted just long enough to force State Rep. Heidi Scheuermannf (a Lisman ally) out of the race.

— The continued activity of Campaign for Vermont. Its members do include people from across the political spectrum, but the group still tilts substantially toward the right. And many of its key supporters are the kind of people who used to be mainline Republicans.

— Roger Allbee’s decision to run for State Senate as a Democrat. The former Douglas Administration cabinet functionary and self-described liberal Republican could have been a powerful ally for Scott. Instead, he’s hoping for a place on the other ticket.

— Former State Rep. Oliver Olsen’s decision to run again for his old seat, but this time as an Independent. In the 2011-12 biennium, Olsen was one of the more vocal and effective members of the House Republican minority; this time, he seems to believe that he’s better off without the “R” next to his name.

— Last week’s VTGOP campaign finance report which, as I reported in this space, was truly horrific. A quarterly fundraising total — during a campaign season, mind you —  of only $7,500. The bulk of that came from a few party insiders. And over the past year, the VTGOP has drawn virtually no small donors, a sign that so far it’s failing to reach the grassroots. In spite of Sunderland’s repeated claims that the people of Vermont are waking up to the failures of the Shumlin Administration. Well, they haven’t awakened enough to write any checks, that’s for sure.

What that dismal report means is that the VTGOP has lost some of its hard-core, ideologically driven donors, but has yet to even begin to attract a new donor base. Nor has it even begun to convince former Republican stalwarts to come back home.

— And finally, this week’s formation of Vision to Action Vermont (V2AVT), a “bipartisan” PAC aimed at supporting candidates who are focused on improving Vermont’s economy. Its co-founder is Scheuermann herself, and her decision to create this independent group is an interesting one. You’d think that Scheuermann would be one of Phil Scott’s most trusted lieutenants, with a bright future in Republican politics. But as with Allbee and Olsen, she has apparently decided that the Republican brand is too toxic to advance her goal of electing lawmakers who are focused on economic issues.

Take all these events together, and it seems like the Republican center-right is fragmenting in all directions rather than coming together behind Scott and Sunderland. That, I think, is a very bad sign for Scott’s effort to broaden his party. The people who might have been part of a new, broader, more vibrant VTGOP are channeling their energy in other directions.

It may seem unfairly early to declare Scott’s project a failure. After all, it’s been less than a year, and it took quite a few years for the VTGOP to get so badly screwed up. But Scott’s party has no resources and few candidates; if he fails to make any headway in Legislative elections, a substantial portion of the party will be ready and eager to unseat Scott’s team and return the party to its former course: down an ideological dead end.