The Democratic race for six Senate nominations in Chittenden County will be an all-out affair, with two vacancies in a district that tends to automatically re-elect incumbents. But State Rep. Chris Pearson, the Progressive hopeful, just got a big dose of good news.

Yep, Bernie is starting to open his fundraising apparatus to more candidates — which is the best way for him to build a progressive movement.

In a crowded Democratic primary that could get expensive, this makes Pearson a front-runner. Because “expensive” by Vermont standards is “piddling” almost anywhere else.

END_OF_DOCUMENT_TOKEN_TO_BE_REPLACED

Bit of a surprise came to us late last week, with news of a survey showing Governor Shumlin had suddenly enjoyed a surge in popularity.

The results were released by Morning Consult, a national polling agency that gave Shumlin a 55 percent approval rating after collecting data online between January and May. Shumlin jumped nearly 10 points from the last time Morning Consult polled Vermonters, in November, when 46 percent of respondents gave him a thumbs up. 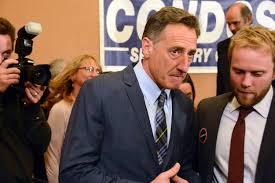 The results are also at odds with a February poll from the Castleton Polling Institute that put the Governor at 37 percent approval, and the previous two Castleton surveys: in September 2015, Shumlin was at 40 percent; in March 2015, it was 41 percent. That’s awfully darn consistent.

The Democratic Party was quick to promote the Morning Consult number. Understandable; it would be the best possible news for the party and its gubernatorial candidate. It would prove broad support for the Democratic agenda, and it would mean the candidate wouldn’t have to create distance between her- or himself and Shumlin.

As for me, well, color me skeptical. After all, what has happened since February — or November — to bolster Shumlin’s popularity? He didn’t score any high-profile victories in the Legislature. And he’s taken quite a hit from the EB-5 imbroglio, since he’d associated himself so prominently with the scandal-plagued developers.

Is there some other counterbalancing factor — some political “dark matter” exerting a positive gravitational pull on Shumlin’s numbers? Or is it just an outlier?

END_OF_DOCUMENT_TOKEN_TO_BE_REPLACED

Don’t ever accuse the VTGOP of not being generous. They’ve apparently gifted Auditor Doug Hoffer with a “serious” challenger for his post. I haven’t seen a news release or anything; all I’ve seen is this Tweet from VTGOP Executive Director Jeff Bartley.

Feliciano for Auditor! I’m very excited to have @DanFeliciano on the @VTGOP team. #vtpoli #vtgop16

Yay! Dan “Mr. Four Percent” Feliciano! The man who can never quite make up his mind whether he’s a Libertarian or a Republican. But no matter what the label, there’s one thing you can count on:

END_OF_DOCUMENT_TOKEN_TO_BE_REPLACED

My Sunday Times Argus brought the cheery news that the American Automobile Association, well-known haven for hippies and pot-smokers, had released a report throwing shade on saliva testing for detecting marijuana-impaired drivers.

You may recall that the Legislature came verrry close to enacting a law that relied on spit tests, even though a report commissioned by the state questioned their efficacy.

The AAA report’s conclusion: “There is no scientific way to prove if someone is under the influence of [marijuana] while driving.”

The spit test indicates the pressence of THC, the active ingredient in marijuana, in a driver’s system. The problem is the lack of a clear relationship between the quantity of THC and a driver’s level of impairment. Some drivers are just fine with a hefty dose of THC, and some are iffy with very low levels.

Of particular importance: those who use marijuana medicinally are likely to have high levels of THC in their systems, but still be just fine behind the wheel.