Sorry for the delay in this continuing series; it’s tough work, slogging through a solid hour of Bill Sorrell. He is remarkably inarticulate for such a prominent figure. 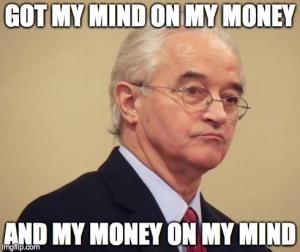 Anyway, I’m taking a closer look at Our Eternal General’s comments in an interview
with VTDigger’s Mark Johnson. I think it’s worthwhile because this was the first time Sorrell has been quizzed at length about allegations of campaign finance funny business and excessive coziness with high-powered lawyers soliciting state contracts.

Part 1 compared Sorrell’s remarks with the public record about the MTBE lawsuit. Today, we turn to Sorrell’s fuzzy reporting of expense reimbursements by his campaign fund to himself.

Several times a year, candidates must publicly disclose each campaign expenditure they make, “listed by amount, date, to whom paid, for what purpose,” according to state law.

A review of Sorrell’s recent filings shows that he has routinely ignored the rules. Sixteen times over the past four years, Sorrell’s campaign has reimbursed him for hundreds, and sometimes thousands, of dollars’ worth of expenses paid out of his own pocket. In each instance, the campaign provided only a vague explanation of what Sorrell bought with the campaign cash — and never once did it disclose who it paid.

Sorrell’s response: Hey, a lot of people do it that way.

Then Governor Douglas, before he decided not to run, had reimbursements, I forget the amount. Matt Dunne, one of the gubernatorial candidates in 2010, over $15,000 in quote reimbursements. …And then if you want to look at ’12 and ’14, I think you’ll see Phil Scott was some thousands of dollars of reimbursements, Peter Shumlin, ahh, and, and others. And, uhh, so this wasn’t just Bill Sorrell violating, you know, trying to hide what the reimbursements were for.

Sorry, that’s how Vermont’s Top Attorney talks. But on the basic point, I must report, he’s pretty much correct. Secretary of State Jim Condos:

I think the law is written that you should have some detail. The fact is, it was never really challenged before. …I don’t see this as a major issue.

Okay, so Sorrell is right?

Well, yes and no. He technically violated the law, but so have many others. The bigger problem, however, is Sorrell’s double standard. He has brought the hammer down on other candidates (Dean Corren, Brian Dubie) for violations that are arguably at least as technical and picayune as his own. Indeed, he has proudly positioned himself as a guardian of campaign-law purity. Except, y’know, when it comes to himself.

Like in September of 2014, when he held a press conference with Dean Corren on the subject of high gas prices in Chittenden County. A curious incident, considering Sorrell’s dogged pursuit of Corren for allegedly violating public-financing rules by accepting in-kind contributions from the Vermont Democratic Party. Sorrell has defended himself by arguing that his appearance was “part of his consumer-protection work as attorney general, not as a candidate.”

Which, hahaha, he was running for re-election and it was the height of campaign season. Plus, even if he was there purely in his official capacity, wasn’t he guilty of giving an impermissible benefit to Corren, who was nothing but a candidate?

This is yet another illustration of a fundamental fact about Sorrell: his head is so far up his own ass, he can see light at the end of the esophagus*. On campaign finance reporting, he may not be guilty of breaking the law — at least the spirit of the law, as it is very generously interpreted by Vermont politicos — but his judgment and perspective are so skewed that his ability to be an impartial arbiter must be questioned.

I guess that’s what happens when you hold an office for that long, and usually romp to re-election. You start thinking you’re above reproach. Which is a very dangerous thing for a politician to believe.

4 thoughts on “Sorrell vs. the record, part 2: Campaign reimbursements”