Hey, start off the New Year right with an evening of fun, food, and Republicans!

The Vermont Republican Party will be hosting “The Future is Bright: A Rally for an Affordable Vermont.” on January 14th, 6:30pm, at the Barre City Auditorium. Showcasing our statewide candidates, legislative leaders, and party officials, this event will outline our vision for a brighter and more affordable Vermont.

“Statewide candidates,” eh? Well, they’ve got two guys running for governor, one in the hunt for Lite-Gov, and… er… that’s it.

I guess the podium won’t be too crowded. That is, unless the VTGOP pulls several rabbits out of its hat and actually manages to field something like a full slate of credible candidates.

But wait, there’s more — this isn’t just a mutual back-slapping and money-grubbing affair. No sirree; it’s a tribute to real American heroes.

In addition to kicking-off our 2016 election efforts, the Republican Party will be launching a year long initiative called “The Year of the Veteran.” At each Vermont Republican Party event, we will be recognizing and thanking veterans for their service and dedication to our Country.

Isn’t that special. And what are we doing to support our Veterans? Besides lip service, that is.

Attendees are asked to bring an unwanted Christmas gift or purchase an article of clothing to be donated to local veteran organizations.

“Thanks for your service, soldier. Here’s a stale fruitcake.”

Meanwhile, all the tangible proceeds of the event will go into the VTGOP’s nearly-empty coffers. Which is more than a bit reminiscent of those “Salute To The Troops” pageants at sporting events — which turned out to be money grabs by the teams, paid for by the U.S. military.

Speaking of lip service to our armed forces, check out the ticketing options. 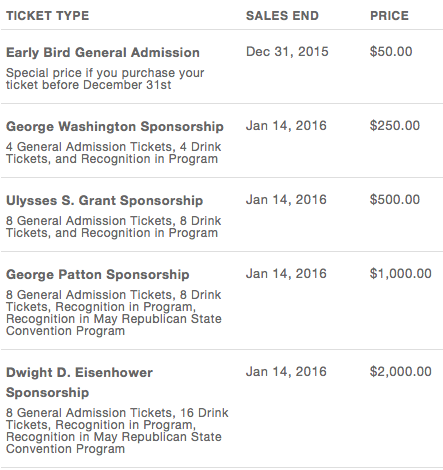 Tell me, how did George Washington wind up as the cheap ticket?

Below Ulysses S. Grant, even?

Well, I guess the Father of our Country wasn’t a clearly identifiable Republican, unlike Grant and Ike. As for Patton, well, he was our most famous hardass, so he must have been a Republican, right?

Anyway, if you’re inclined to subject yourself to such a thing, here’s your sign. And don’t forget to bring along a lava lamp or electric nose hair trimmer to honor our brave service members.

6 thoughts on “Another can’t-miss event from the VTGOP”