Welp, the biggest tease in Vermont politics is at it again. Our old buddy, retired plutocrat Bruce Lisman, is dropping hints that he’d possibly-maybe let himself be crowned governor if only the people would realize that he is exactly what we need. 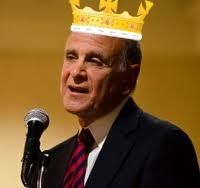 No really, it’s just a hat.

There’s been speculation about a potential Lisman run for governor since he founded his self-funded advocacy organization, Campaign for Vermont, almost four years ago. And every once in a while, for no apparent reason other than to draw attention to himself, he floats little trial balloons. Usually it’s with assertions like “many people have asked me to run…” and similar humblebrags.

But while I’m sure there are folks in his circles who think he’s the bee’s knees, I’ve seen absolutely no evidence of a Lisman groundswell, ever.

This week brings an opinion piece, posted on his own blog and also on VTDigger. It’s entitled “Let’s Snatch Victory From the Jaws of Defeat.” The gist of it: We need a leader (ME) with vision and fresh ideas. A leader (ME) exactly like, oh, modesty forbids. But you know who (ME) I’m talking (ME) about (ME ME ME PICK MEEEE).

Lisman starts out by slamming the government for “not listening to its citizens” and “persistent budget mismanagement” and “incompetence” and other sins and shortcomings. He doesn’t identify the authors of this “incompetence” by name or party because, well, he’s too much of a gentleman to get personal. And remember, he’s nonpartisan. But You Know Who He Means, Don’t You?

He then asserts that “Genuine, sustainable prosperity can’t be bought with government spending,” which is nonsense. Over and over again in our history, prosperity has been “bought with government spending.” The United States was a coastal cluster hemmed in by the Appalachians until the state of New York invested in the Erie Canal, something the Bruce Lismans of the day absolutely refused to tackle.

The opening of the West was made possible by federal conquest of Native Americans and the provision of services and military protection for settlers, and it was underwritten by massively generous government land giveaways to private interests. Our harvesting of the world’s resources has been made possible by the use (or threat) of military force. We got out of the Great Depression through government spending on recovery programs and the military buildup for World War II.The building of infrastructure has literally paved the way to prosperity. The interstate freeway system alone was responsible for tremendous postwar growth.

Need I go on? I could. There’s lots more.

Indeed, I would argue that most of America’s great leaps forward were sparked by government power, not the private sector. In Vermont, a healthy public-sector investment in accessible secondary education and in a better transportation system are the most crucial keys to growth and prosperity.

But let’s return to the Wall Street lifer who believes, shocklingly, that Wall Street-style investment is the answer to our problems.

After slapping around the unnamed miscreants of Montpelier, he turns to what Vermont needs and what real Vermonters allegedly want. Surprise, surprise: it’s the Bruce Lisman policy agenda!

He closes with “It’s not too late to snatch victory from the jaws of defeat. Let’s leave the politicians behind and forge ahead.”

So, Bruce. When we “leave the politicians behind,” who do you suggest to be our leader? Someone with the vision, ideas, and experience of, just spitballing here, Bruce Lisman?

This is far from the first time Mr. Wall Street has all but begged for a coronation. About this time last year, he made a brief spectacle of pondering a candidacy, prompted by a self-reported flood of requests that he run, before thinking better of it. And his Twitter feed is sprinkled with thinly-veiled pleas for the people to rally around him. Here’s a couple of classics:

#VTers deserve a “champion” for jobs and a vibrant diversified economy. http://t.co/bG5PSD41Bj

Yes, yes, Vermont needs a “champion.” Got someone in mind?

C’mon, people, can’t you take a hint? Your Prince stands alone on his balcony, awaiting his rightful coronation.

4 thoughts on “The Prince, Alone on His Balcony, Awaits the Adoring Throng”