And it went uncovered by the media except for Nancy Remsen of Seven Days.

Four representatives of Optum, the contractor working with the state to fix Vermont Health Connect, told legislative leaders Thursday that they expect to deliver an automated change-of-circumstance function as of the May 31 deadline set by the Shumlin administration.

“We are confident we will make the deadline,” Matt Stearns, vice president of external communications, said in an interview after private sessions with legislators.

This is big, assuming Stearns’ confidence is warranted.

I spend a lot of time on the ins and outs of the legislative and political process. It’s fun, it’s dramatic, and it’s a minefield of slapstickery. But I know that most of it washes out in the end. With the probable exception of the Norm McAllister saga, the world will little note nor long remember what was done here. But Optum making the deadline would be truly impactful.

END_OF_DOCUMENT_TOKEN_TO_BE_REPLACED 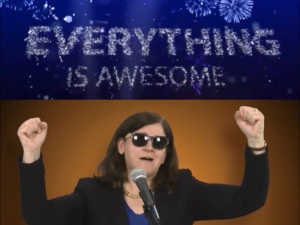 Everything is awesome… when you’ve just made four million smackeroos.

Gracia Martore, CEO of Gannett, last seen disgracing herself in an unbelievably wrong-headed music video, must really believe in the future of her company.

Because she just unloaded more than 80% of her stock holdings in Gannett. American Banking & Market News reports that Martore sold 123,560 shares of stock in the Burlington Free Press’ parent company, leaving a mere 30,034 shares in her portfolio.

How many reporters would that buy?

Her stock dump comes just before the planned split of Gannett’s newspaper and TV/digital divisions. Gannett will retain the troubled publishing businesses, while new entity TEGNA will get all the broadcasting and digital stuff.

The spinoff is expected to take effect by the middle of this year, which is… hmm… checking my calendar… a mere six weeks away.

And where do you think the price of Gannett stock is going to go, after all its goodies are under a new corporate umbrella? I think we know how Gracia Martore would answer that question.

Been an interesting week for homegrown planet-bespoiler Keurig Green Mountain. First, the maker of costly coffee pods had to do an embarrassing about-face on its decision to DRM-up its new coffee maker. It was a capitalistically noble effort to derail competition for its profitable (and planet-bespoiling) K-cups, but consumers rebelled.

Understandable. It’s kinda like if oil companies made cars, and DRM’d the tank so you could only buy their brand of gas. Consumers would naturally rebel. Or, here’s an even more insane one: it’s as if you could buy a printer dirt cheap, but then had to pay extortionate prices for cartridges.

Anyway, embarrassing walkback for KGM. But help is on the way, in the form of its new cold-beverage system. Er, “kold.”

Keurig Kold, set to launch this fall, was developed in a partnership with Coca-Cola, Keurig’s largest shareholder, and the Dr. Pepper Snapple Group. Keurig CEO Brian Kelley said the new machine will make a Coke, and other beverages, indistinguishable from the originals.

END_OF_DOCUMENT_TOKEN_TO_BE_REPLACED

There are two important takeaways from this afternoon’s kerfuffle outside the office of Senate President Pro Tem John Campbell. Most of the attention, including mine, is on his closed-door meeting with the entire Senate Natural Resources Committee and his confused rationalization for banning the media. Campbell actually blocked the doorway, twice, as Seven Days’ Paul Heintz and WCAX-TV’s Kyle Midura tried to gain entry.

The closed-meeting aspect certainly deserves more scrutiny, maybe even a court challenge; but we shouldn’t lose sight of the equally offensive substance of the meeting. That involved Campbell’s attempt to single-handedly amend — or possibly derail — a major piece of energy legislation known as the RESET bill.

The House had passed the thing. It had gotten through Senate committees with minor changes, and reached the final stage (third reading) on the Senate floor. And then, at the last minute, Campbell bigfoots the whole process. Legislative rules required that the bill pass the Senate today (Thursday) in order to be considered by the House on Saturday, when it’s scheduled to adjourn. If the Senate passes the bill Friday, which seemingly depends on Campbell’s good graces, the House would have to agree by a three-quarters majority to suspend its rules in order to vote on the bill.

So there’s a chance this very important bill won’t pass, and it’s all thanks to your Senate President Pro Tem.