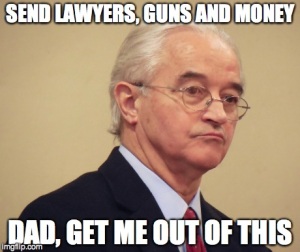 The cloud of questionable campaign finance activities hangs heavy around the head of Our Eternal General Bill Sorrell. Fortunately for himself, his peripheral vision isn’t so great, so he’s blissfully unaware that the storm is gathering and everyone around him is scurrying for cover.

The editorial quotes Sorrell’s heartwarming assurances: “It’s unfortunately that there are questions about whether there was undue influence. I know there was no undue influence.” The News has a stiletto-sharp rejoinder:

We guess it’s reassuring that in his heart, Sorrell knows he’s right. … On the other hand, the allegations are not so far-fetched that “take my word for it” is an adequate response from the state’s chief law enforcement officer, whose position and power are such that his or her integrity needs to be above reproach.

However, in the absence of any action by Governor Shumlin — or any semblance of concern, frankly — the only folks who could mount an independent investigation are our State’s Attorneys. Well, one or more of them.

There are two problems with that scenario.

First, the State’s Attorneys are heavily dependent on Sorrell’s office for legal, logistical, and staff assistance, and going against the Eternal General is a one-way ticket to figurative Siberia. And second, the State’s Attorneys lack the resources to take on a time-consuming investigation. They barely have what they need to do their jobs.

But wait: there is hope on the horizon. I’m here to offer One Neat Trick — uh, make that Two One-Neat-Tricks for how to investigate Bill Sorrell.

First comes from the Valley News:

If the matter is as frivolous as Sorrell asserts and he is concerned about wasting taxpayer dollars, how about stopping short of appointing a full-blown independent counsel and asking the 14 elected state’s attorneys to select a respected retired judge to review the record as it exists so far and determine whether it raises enough questions to merit a full inquiry?

The second comes, indirectly, from Bill Sorrell himself. As Paul Heintz has reported, at least some of Sorrell’s self-touted lawsuits against big corporations have actually originated in national law firms that specialize in ginning up multi-state lawsuits and sharing the proceeds with state attorneys general who sign on. Contingency basis, right? Common practice in civil law.

Well, here’s a deal that some law firm or other would probably accept. Hire a firm to investigate Sorrell in exchange for a cut of any fines or penalties he winds up paying. If he’s innocent, they roll snake eyes. But if he’s guilty, well, those penalties could add up to a pretty penny.

Take his extremely sloppy reports on campaign expenditures he has made. Those reports, intentionally or not, seem in clear violation of campaign law — and each violation brings a fine of up to $10,000.

Since the 2010 election cycle, Sorrell has filed 21 expense reimbursement reports that are unacceptably vague. That’s a potential haul of $210,000 right there, not even counting the other three possible violations he’s been accused of.

Enough financial motivation to attract a qualified law firm, no? And at first glance the idea may seem strange, but it comes straight from the Bill Sorrell playbook.

So how about it? Let’s offer a 50-50 split of any proceeds, and see if any of our blood-in-the-water law firms is willing to bite.

Yeah, I know, it’s probably illegal to investigate campaign finance violations this way. But it’d certainly be a creative way around the lack-of-resources problem. And if Bill Sorrell were brought to account by an ambulance-chasing law firm, that’d be sweet, sweet ironic justic.