I think it’s time to hold Vermont Republicans’ feet to the fire on Indiana’s new “legalize discrimination” law. Usually, I’d give the VTGOP a break with regard to the massive insanity in their national party; our own Republicans are a feisty bunch, but they hardly ever* cross the line into sheer stupididity.

*Well, there was that time when party chair Dave Sunderland outed himself as a climate-change denier. 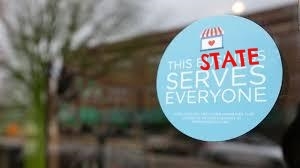 But the time has come. I realized this last night, when Rachel Maddow noted that every major Republican candidate for President has made statements in support of the Indiana law — in spite of its repudiation in national polls and by the normally GOP-friendly business community. (Even the notoriously politics-averse sports world has had to acknowledge the situation.)

I’m not just talking Ted Cruz and Rand Paul here. Endorsements of the Indiana law have also come from the likes of Scott Walker and Jeb Bush, who allegedly represent the “moderate” wing of the GOP.

And that makes it relevant to the Vermont party. What are we to think of the Republican brand, when every one of its potential presidential candidates has come out in support of legalizing discrimination?

At the very least, they should unambiguously declare their opposition to laws like this one.

So what say you, Dave Sunderland? Jeff Bartley?

Update. I’ve received a comment from Senate Minority Leader Joe Benning; it can be seen below, but I’m also adding it to the body of this blogpost:

It was (is) a stupid law, drafted by people who either didn’t understand the ramifications or who had an agenda that America should not be following. If they were the former, they need better legislative council; if the latter, I’m surprised to see that element in Indiana.

But that’s just MY opinion.

Thank you for your direct, plainspoken response, Senator.

On Monday, Governor Shumlin announced a series of initiatives to end child and family homelessness in Vermont by the year 2020. I didn’t really give it a thought, honestly; these dates and deadlines are announced with much fanfare; but as with sports prognostications, nobody ever checks up on the outcome. Besides, Shumlin will almost certainly not be Governor when his promise comes due.

Among families with children, homelessness is on the rise. According to annual data collected from school districts and supervisory unions by the Agency of Education, the number of homeless children in Vermont has risen 46 percent during the past five years, from 784 in 2010 to 1,145 in 2014.

So yeah, good move. But did anyone think to ask this seemingly obvious question?

How can you say you’re committed to ending family homelessness when you’re making major cuts to human services programs?

To my discredit, I didn’t think of it either. One of our white hat lobbyists raised the question in a hallway chat. (Since it wasn’t explicitly on the record, I won’t name the person. If s/he wants credit, please get in touch.)

The Governor’s budget proposed $22 million in cuts to the Agency of Human Services, including $6 million for LIHEAP and $1.7 million from Reach Up. Within the strictures of his antipathy toward raising taxes, he did a decent job of spreading the pain. But still: he wants to end family homelessness, but his budget would make it harder for poor families to keep home and hearth together. Seems a bit contradictory, no?

The white hat put it in terms of a tax hike on the poor. Technically it’s not, but it is a reduction in benefits they would have otherwise gotten. It’s less money, less assistance in their pockets. (Especially with the LIHEAP cut, which rests on the iffy proposition that fuel prices will continue to be low for the next year.)

In that sense, it is indeed a tax on poverty. And it does seem at odds with the Governor’s well-publicized, well-intentioned push to end family homelessness.