So yesterday Governor Shumlin filled two vacancies in his cabinet. Justin Johnston was announced, in a brief flurry of bad Aussie jokes, as Jeb Spaulding’s replacement in the role of Secretary of Administration. 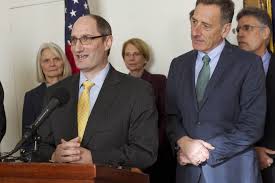 Now, I’m sure Hal Cohen is a nice guy and he’s clearly dedicated to the field of social services, having served as head of Capstone Community Action for 18 years. You don’t keep that job for that long unless you’re committed to the mission.

But is he really the best guy for the biggest agency in state government? And even worse, an agency facing an immediate mandate to cut its current-year budget by ten million bucks?

I know virtually nothing about Hal Cohen. But here are a few numbers that portray his challenge in very stark terms.

In short, Hal Cohen is making a quantum leap as a manager. At a time when he will face a massive management challenge from Day One.

But he has never managed an organization anywhere near the size and complexity of AHS. When you manage a staff of 180, you do a lot of hands-on, day-to-day management. You have a personal relationship with a sizeable chunk of your employees, and you probably know them all by name.

That’s the basic challenge in making this quantum leap.

And then you add the fact that, between this year’s budget and the next, he may well be asked to make spending cuts equivalent to the entire annual budget of Capstone.

I’m sure that if Shumlin had pulled someone out of the business world, or out of some other state agency, we’d all be howling about hiring a bean-counter who cares more about the bottom line than helping people. (For example: Johnston saying that the primary goal of the budget is “affordability.” Meaning no new taxes.) But I have to wonder if Cohen is the right person for this job at this time. And I also have to wonder, with all due respect to Hal Cohen, how many other people might have said “no” to the idea of becoming the head of an overstretched agency facing major budget cuts. It’s hard to imagine that Cohen was the first name on the list.

I hope, for the sake of Vermont’s poor, that my misgivings are proven to be groundless.