And here’s what I’m talking about.

Yesterday, I wrote about Neal Goswami’s journalistic self-sacrifice — reading 2,400 pages of government emails so we don’t have to. The emails in question were between the newly-notorious Jonathan Gruber and various Shumlin administration functionaries. And Goswami found a conspicuous absence of scandal. Indeed, the emails painted a picture of some very dedicated people working very hard to devise the best possible single-payer system.

Naturally, though, the lack of scandal hasn’t stopped the right wing from desperately fanning the Gruber flames. This is not at all surprising; in fact, it’s the right wing’s modus operandi. Talking Points Memo:

Gruber-mania has gripped the conservative mediasphere in a way that few stories have, becoming another brand-name controversy like Benghazi and the IRS. An academic who had been little known outside of Washington or Boston has been mentioned nearly 2,800 times in English-language news since news of the most recent video broke last month. Prior to that, across a career that spanned decades and after playing an important role in Massachusetts and national health care reform, he’d been named less than 1,000 times, according to a TPM LexisNexis search.

The lesser members of the mediasphere who operate in this lonely outpost are taking their cues from their big brothers, and trying to make mountains out of molehills.

Take Rob Roper, the Eddie Haskell of Vermont conservatism. He pulled out one brief excerpt from Goswami’s report, which I’d cited as a positive. Key quote from Gruber:

I am really excited to work with you all — I think we have the chance to really make history here.

So would Gruber mislead Vermont voters because he’d rather make history than not? With over $2 billion at stake, we have to assume the answer is yes.

One little evidence-free assumption, and we can dismiss the entirety of Gruber’s work. Plus any proposal Gov. Shumlin makes because, even if he fired Gruber today, all the work on single-payer has already been thoroughly Grubered.

This is exactly the same rationale used by the far right for ignoring climate science: the scientists have a stake in climate change, so their work can be dismissed.

Look, it’s only natural that an expert would have a lively engagement in her/his field of study. Aren’t you interested in what you do? I hope so. But the academic world — unlike the world of conservative faux-outrage — has ethical standards and principles. Academics have an interest in doing honest work, to ensure that their work has an impact. And, of course, academics who commit fraud see their careers end in shame.

But the Rob Ropers of the world know nothing of this, because their purpose is rousing the rabble. Adhering to the truth is a professional impediment. And fraud is a tried and true method of career advancement.

And that, by the way, is it: The only thing Roper could find in Goswami’s story to yammer about is Gruber’s enthusiasm for his work.

Meanwhile, serial failure Darcie “Hack” Johnston has been busily retweeting stuff from Breitbart.com, one of the sleazier outposts of the conservative mediasphere. For some reason, Breitbart has posted a series of stories about Gruber’s work in Vermont. Seems like small potatoes for a national website, but whatevs.

Johnston is so far out there, she seems to believe that Breitbart is a convincing source of news. In fact, the guy who’s writing its Vermont stories is a proud Tea Partier with no journalistic credentials outside the conservative mediasphere.

But again, I’m not surprised. This is SOP for Johnston: Accept (and broadcast) every conservative source, no matter how shameless, as the Gospel truth.

When, in fact, “truth” has nothing to do with it. 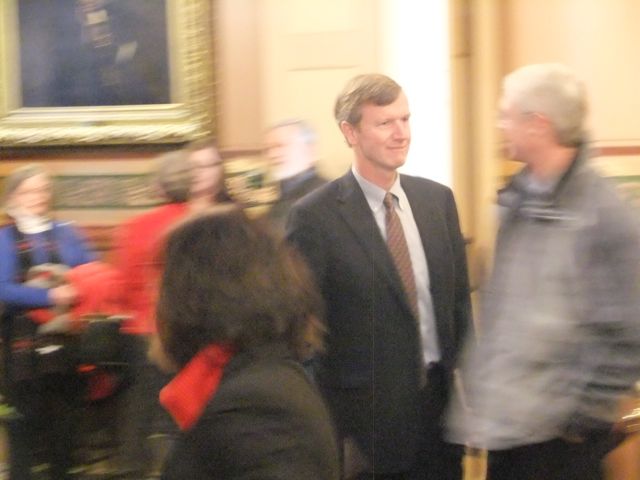 Scott Milne, the lone constant in an ever-changing world.

Scott Milne’s Dec. 8 announcement that his campaign for governor would continue was, perhaps, the quintessential Milne event.

Tortuous logic in support of his own position? Check.

Sarcastic cracks about the media? Check.

References to his own humility? Check.

References to his own brilliance? Check.

And, finally, an almost complete absence of Republican bigwigs? Check.

Double-check, in fact. Milne made it clear that there’s no love lost between him and the VTGOP establishment.

First the topline, then we’ll go down the checklist. Yes, Milne will carry his campaign forward into the Legislature, where he wants each lawmaker to do his/her Constitutional duty and select the best person to govern Vermont. His remarks were full of the usual exaggerations about the calamity that awaits Vermont if Peter Shumlin returns to office.

But at the same time, he won’t be actively campaigning.

I am not going to proactively be trying to convince legislators to vote for me. My door is open. …I don’t think it’s something I should be twistin’ arms for.

As I wrote earlier, Milne was rhetorically aggressive and tactically passive.

And now, the checklist.

Defiance of conventional wisdom. Almost too many examples to count. He will carry on, in spite of (1) historical precedent, (2) a heavily Democratic legislature, (3) common sense.

Oh, and he’s done virtually nothing to prepare for running the state, should the Legislature elect him:

Tortuous logic in support of his position. Milne took a page from the Antonin Scalia Book of Constitutional Originalism by saying that the state Constitution was the only relevant text to be considered. He patched together two separate items from said document: The mandate for the Legislature to settle elections when no single candidate wins a majority, and the oath taken by lawmakers. (Which, as we’ll see a little further on, turns out NOT to be the right oath.)

Abandonment of previous tortuous logic. Earlier, Milne had posited a couple of rationalizations for his election: (1) Lawmakers should vote the way their constituents did, instead of abiding by the statewide results. (2) The historical precedent is significantly weakened because wasn’t obeyed in the 1978 election for Lieutenant Governor.

There was no hint of either argument today. He’s on to brand-new tortuous logic that we haven’t had a chance to disprove yet.

Self-serving interpretations of history and recent events. He asserted that there is no historical precedent for electing the top vote-getter, even though the last time it didn’t happen was in 1853. Apparently he’s spent some time in the history books, and has constructed his own aircastle of argument. It goes like this:

After the mid-1800s, there was almost a century of unbroken Republican rule with no close tallies in the general election. That wipes out most of the precedent. Then he posits a self-servingly narrow definition of history: 1986 was the only comparable occasion, because it was the only other time when an incumbent governor received less than a majority. All other occasions, like Jim Douglas’ win in 2002, conveniently enough, do not apply.

Nor does Mr. Douglas’ own advice to maintain the precedent and exit the race.

Sarcastic cracks about the media. This time, Seven Days’ Paul “Be Your Own Boss” Heintz was the main target. (Although when I asked for a copy of his speech “so I wouldn’t misquote you,” he shot back with “You’ll probably misquote me anyway.”) Milne slammed Heintz a couple of times for asking the same question four times. Heintz only repeated the question because Milne didn’t give a straight answer. 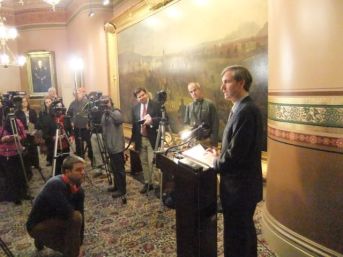 References to his own humility. “I think what Vermonters like about my humble campaign is that we didn’t try to sell people things.”

References to his own brilliance. This came in response to questions about whether he’s been preparing to assume the Governor’s office. Like, say, naming a cabinet or prepping a budget.

All this mumbo-jumbo about how tough it is to be Governor and how you’ve got to do all this stuff. You look to Governor Walker in Alaska who won in a recount and was inaugurated two weeks later.It’s entirely possible to put together a team that can do a credible job.

Later, when asked if he had started writing a budget (due two weeks after inauguration), he lifted up a page from his prepared speech, showed the blank back side of the paper, and said “It’s right here.”

Malapropisms. The best one came directly after the above quote: “I have zero lack of confidence that this isn’t going to go in a very good direction very quickly if I’m elected.”

If I count correctly, that’s a triple negative.

Outright blunders. See my previous post about Milne’s apparent confusion over Constitutional oaths. He said that lawmakers, in choosing the next governor, should abide by their Constitutional oath. And then he quoted the Voter’s Oath, formerly known as the Freeman’s Oath.

The oath taken by lawmakers is completely different. Oopsie.

Almost complete absence of Republican bigwigs. There was a small cheering section stationed behind the gaggle of journalists, cameras, and blogger*, but as far as I could tell, no Republican officeholders or state party officials attended the event. Which is curious, since most top Republicans profess to backing Milne’s claim to the governorship. If they were serious, you’d think they’d be on hand to provide some moral support and give some good quotes to reporters.

When asked about party support, Milne was rather cold toward the VTGOP.

Perhaps this is nothing more than political repositioning: in the Legislature, he doesn’t need to convince Republicans, he needs to get centrist Dems on board. So it’s only natural that he’d try to brand himself as a moderate maverick with no particular party ties. On the other hand, he professes to be an honest, humble, anti-politician, so it’s difficult to imagine him taking a position out of pure political convenience.

Anyway, the news conference was kind of a clusterf*ck… but exactly the kind of clusterf*ck we’ve come to expect from 2014’s answer to Fred Tuttle.