A couple days ago, I noted the interesting footwear Bruce Lisman chose for this week’s Gov Pitch event:

Bruce Lisman, apparently desperate to come across as a true-blue Vermonter, sported a pair of beige shitkickers — the kind of boots you’d normally wear in a barnyard.

Well, turns out I was misled by the available images of the event. An attendee sent me a note setting the record straight:

They weren’t your traditional shitkickers. They were suede booties the likes of which I haven’t seen since 1977.

Hahahaha. That’s even worse than deliberately dressing like a farmer. My apologies to Bruce Lisman, Bootiemaster.

So the five major-party candidates for governor got together earlier this week for Gov Pitch, a forum on boosting Vermont’s economy hosted by the fine folks at Fresh Tracks Capital. A couple of items caught my attention: Bruce Lisman’s curious choice of footwear, and the impenetrable vagueness of the Phil Scott campaign.

Four of the five were dressed for business, including well-polished footwear in black or brown. Bruce Lisman, apparently desperate to come across as a true-blue Vermonter, sported a pair of beige shitkickers — the kind of boots you’d normally wear in a barnyard. Here’s a piece of a Seven Days photo: 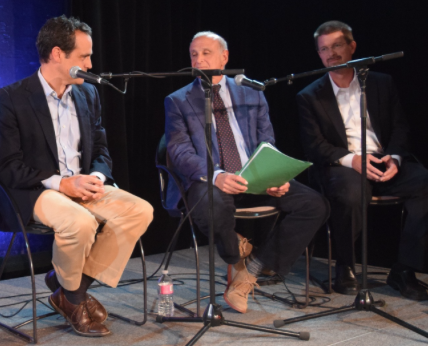 I seriously doubt he ever wore those to his digs in the dark heart of Wall Street. Then again, we’re kinda-sorta supposed to forget about his decades-long immersion in the culture of high finance and accept him as a born-and-bred Vermont boy. Just like, mmm, Rich Tarrant.

Anyway, nice try, Bruce. But in the future, you might just stick with the Guccis and try to prove your bona fides with the substance of your remarks.

On to Phil Scott, whose campaign has trumpeted his LEADERSHIP but said little to indicate where, exactly, he wants to LEAD us.