Well, we’ve got another hot one: Bill Lawrence, candidate for the House in the Chittenden-3 district, which includes Jericho and Underhill. And I’m guessing that if we spent a few hours trolling the social media accounts of Republican candidates, we’d find more than a few like McGarghan (who Tweeted that President Obama should be hanged) and Mark Donka, whose Facebook extremism has previously been chronicled in these pages.

I might humbly suggest to Don Turner that he should teach his would-be candidates not to post egregiously awful stuff on Twitter or Facebook. I mean, you don’t want to make it appear that the VTGOP is a party full of racists, conspiratorialists, and extremists, do you now?

Bill Lawrence, to judge by his social media content, is a very conservative Republican, a Donald Trump supporter, formerly an enthusiastic backer of Bruce Lisman, a racist and a xenophobe (especially when it comes to Muslims), and an aficionado of far-right conspiracy theories.

He certainly has the First Amendment right to post whatever garbage he wants to. And I have the right to inform the good people of Chittenden-3 what kind of person is tainting their ballots.

Mr. Lawrence’s proclivities were brought to my attention by a fellow liberal Tweeter named Scott Pavek (@RSPavek), who RT’d several of Lawrence’s more intemperate Tweets. Good thing, too; Lawrence seems to have closed down his Twitter account after his posts were discovered.

Too bad we have screenshots. Also too bad that Lawrence hasn’t thought to scrub his Facebook page, which has quite a few other nasty pieces of alt-right propaganda.

And here, submitted for your consideration, are some entries from the Lawrence Files. 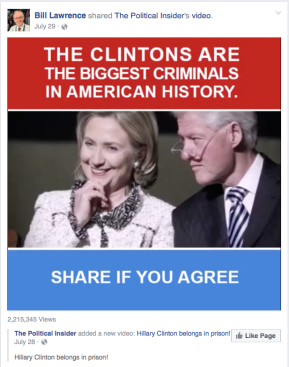 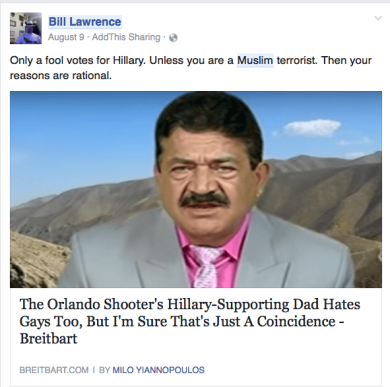 Thank you, Bill, for calling me a fool and/or a terrorist. In return, I think of you as a hateful bigot. And if you think that’s harsh, well, get a load of this: 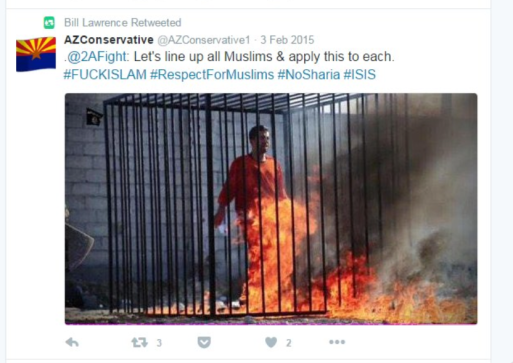 Perhaps Mr. Lawrence will defend himself the same way David Kirk has tried to: that he doesn’t necessarily believe this shit, he just thought his Twitter followers might be interested or even find it funny. Burning people alive for their religion, ha ha ha. 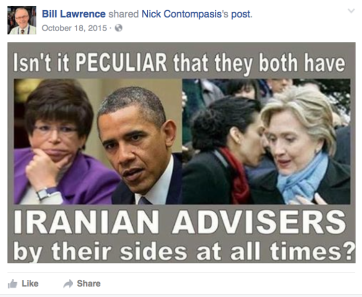 Clinton adviser Huma Abedin is a popular target for the alt-right. How dare a Muslim-American rise to a high position? But, as it happens, she is not at all Iranian. Both her parents were from India. As for the woman with President Obama, Valerie Jarrett was indeed born in Iran.

In 1956, when the Shah was firmly in control of Iran and would remain so for more than two decades.

Her father was working as an administrator at a children’s hospital.

Her family moved to America in 1963 and she has lived here ever since.

Bill Lawrence is also, it would seem, a gullible dupe for the flimsiest of right-wing conspiracy theories. What a jamoke.

Speaking of flimsy conspiracy theories, didja hear the one about how Hillary is a secret lesbian?

Lawrence’s Facebook page also reveals he’s a devout Catholic. Sure got a lot of hate in his heart. 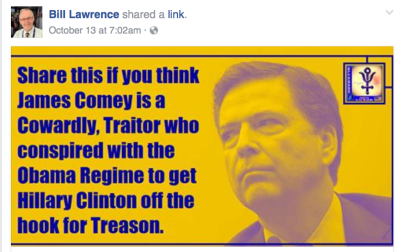 Okay, so not only should Hillary be behind bars, but so should the head of the FBI. Anybody else on your hit list, Bill? 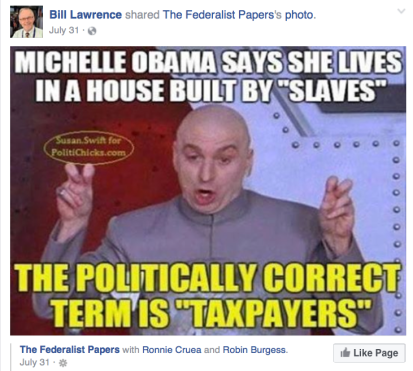 What a maroon. The taxpayers didn’t build the White House; they paid for it. There’s a difference. As for Michelle Obama’s statement, it’s simple fact. The White House Historical Society:

African Americans — both enslaved and free — [provided] the bulk of labor that built the White House, the United States Capitol, and other early government buildings.

Ball’s in your court, Mr. Lawrence.

And to the voters of Chittenden-3: bear this in mind when casting your vote for House.

8 thoughts on “Another xenophobic VTGOP candidate”