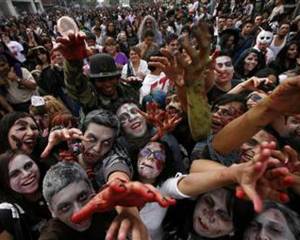 That story comes to us courtesy of Vermont Watchdog, a conservative “news” site. But before you go investing your 401K in surgical mask manufacturers, there’s more you need to know.

The story is based entirely on a single fact: Of the 901 refugees admitted to Vermont since 2013, 318 tested positive for TB.

Those numbers were provided to Watchdog by the state Health Department. Scary, right? Aliens among us are bearing potentially fatal diseases, right? Rutland had better pull the plug on that Syrian refugee plan, lest it be overrun by plague-infested furriners, right?

Ehh, not so much.

Watchdog omits or downplays the mitigating information received from the state. The most important detail, courtesy of Health Department spox Ben Truman:

Most individuals who test positive have latent infection, not active illness, and are not infectious. … As a result, two TB-related conditions exist: latent TB infection and TB disease (or active infection).

More from the Centers for Disease Control:

— Can’t spread TB bacteria to others

The CDC notes that latent TB can convert to active TB in some cases, “especially [in] people who have a week immune system.”

So it’s not that there’s zero concern; it’s that Watchdog seeks to incite a vast overreaction.

Even more telling: the federal government carefully screens refugees for TB and other diseases. However, there is no screening for tourists or students or temporary workers, or for Americans returning from abroad. If you want to be worried about TB, that’s where you should look. Refugees are the least of your concerns.

Inflammatory headlines and deceptive stories are nothing new for Vermont Watchdog, which is  the Green Mountain outpost of a Koch Brothers-connected operation. Its stock in trade is overblown scandals about Democrats and big government. (One of its “news” “categories” is “NANNY STATE,” so there’s that.) But even by Watchdog “standards,” this story is a baseless exercise in fearmongering.

And if the reader comments are anything to judge by, then Watchdog’s fearmongering is reaching its target audience. Here’s a thoughtful comment from “CW Convoy.”

WTF !….Why are the Nationally Culturally Destructive Progressive Cultural Marxist Liberal Left allowed to bring these people into a Civilized Country like America?….Where’s the opposition to this invasion?

Thank the Democrats. They are the reason this filth is here. And MORE on the way. When your kid comes down with any of those diseases once eradicated in America – measles, whooping cough, polio, TB – and then dies….thank a Democrat.

And, succinctly, from “johan longan”:

Yeah, bring more of that filthy crap to our country.

Knowledge is an effective antidote to fear. Too bad Vermont Watchdog is more interested in the latter than in the former.

11 thoughts on “A little fearmongering from VT Watchdog”