To all those up in arms over Scott Milne’s planned development near Exit 1, or Jesse Sammis’ soon-to-be-downsized proposal at Exit 4, how about this one?

A wealthy Mormon developer is buying land in four towns near the Joseph Smith Memorial in hopes of building a planned community there inspired in part by the founder of the Church of Jesus Christ of Latter-day Saints. 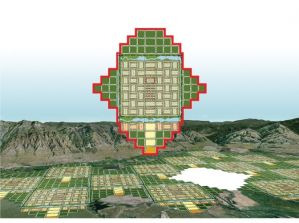 This doesn’t look at all… cultish, does it?

That’s from the Valley News, which would be Vermont’s best daily newspaper if only it was headquartered in Vermont. After it published a story a few days ago, it was picked up by ol’ buddy BP at Green Mountain Daily. Since then, it’s begun to ripple outwards — as it should. This is a Big Biden Deal.

David Hall has already bought some 900 acores in Royalton, Sharon, Strafford and Tunbridge. His goal is to build a massive development housing “as many as 20,000 people within a few square miles.”

Geesh, talk about changing the Vermont landscape. If fully populated, his hypothetical Mormontown would be the third-largest community in Vermont. Not that we have to panic just yet; he’s looking 30-50 years down the road.

But still. His NewVista Foundation has already invested more than three and a half million dollars in land purchases, and “has about $100 million at its disposal.” That’s enough to carry out the plan, for sure.

If this were to come to pass, it would completely change the character of what is now a largely rural area nestled in the crook of I-89. It would probably lead to continuous development from this area to the Upper Valley. Scott Milne’s plan is dwarfed by comparison.

Hall claims to have no ulterior motives. He says his community would not be strictly Mormon; it would be open to everyone.

But still. Who, besides Mormons, would choose to live in a community based on design plans from Joseph Smith that’s bought and paid for by a Mormon millionaire?

The execution of this plan has been strictly under the radar; no contact with Mormon church officials or with any local governments in the four towns. According to VPR’s Steve Zind, the first person to get wind of the scheme was Sharon resident Nicole Antal, who was “going through property transfers as she helped prepare the Sharon town report,” and noticed NewVista’s series of purchases.

Launching an unprecedented development in secret. Well, that’s one way to win friends and influence people.

And now, since this is a political blog, let’s explore the political dimensions of a Mormontown in rural Vermont.

For starters, the new settlers would overwhelm the existing towns; their current combined population is 6,657. Add 20,000 like-minded newcomers to that, and current residents will be permanently on the short end of the democratic process.

I think we have to assume that the vast majority of Mormontown residents would skew conservative. So what would that do to the area’s legislative delegation?

Well, the area currently has three state representatives and four state senators (the four towns are split between Windsor and Orange Counties). All of ‘em are Democrats, and all but one are safe Democratic seats. At least for now.

Of course, if we suddenly have 10,000 to 15,000 new voters in those four towns, their representation would expand. Orange and Windsor combined would have at least one more senator, maybe two; the four towns’ House delegation would grow from three to seven. (Assuming, just for argument’s sake, that Vermont’s population otherwise remains fairly stable, which is its established pattern.)

The net effect on the House: from three Democratic seats to seven Republican.

The net effect on the Senate: from four safe Democratic seats to probably five Republican. That’s a huge impact on a body with only 30 members.

Plus, you add a sizable cadre of committed conservative voters to statewide elections, and suddenly the Republicans are much more competitive.

This is all idle speculation, since it assumes that the state will remain otherwise basically unchanged in population and politics. Won’t happen, not even in change-averse Vermont. But it does help to outline the potential impact of David Hall’s dream on our state. Attention must be paid.