The Sue Minter campaign is hoping to win the support of EMILY’s List, the high-powered PAC for liberal women. Minter recently replaced her in-state campaign manager, Sarah McCall, with Molly Ritner, an outsider reportedly handpicked by the EMILY’s folks. When asked if an EMILY’s endorsement is in the works, Ritner replied cryptically, “They are actively engaged.”

EMILY’s support would be a Big Biden Deal for Minter. It’d go a long way toward overcoming Matt Dunne’s early lead in fundraising. But while she has yet to receive EMILY’s imprimatur, she has managed to gain the support of “Maria’s List,” a Massachusetts-based EMILY’s wannabe.

Maria’s List has scheduled a fundraising event for Feb. 29 at the Boston-area home of its founder, Maria Jobin-Leeds. That’s the good news; the bad news is the invitation letter for that event may be the most ineptly-drafted piece of political mail I have ever seen. It’s full of typos, bad grammar, and factual errors. Doesn’t exactly inspire confidence.

When asked about Maria’s List, Ritner offered this noncommittal reply by email:

As you might know, Maria’s List is an organization that supports “progressive candidates who stand by their values and who run viable campaigns.”  They have decided to support Sue in her campaign and are hosting an event on her behalf.

As for the email specifically, the content was not approved by the campaign.

Well, that’s good. Because the content is awful. The letter in full, after the jump. 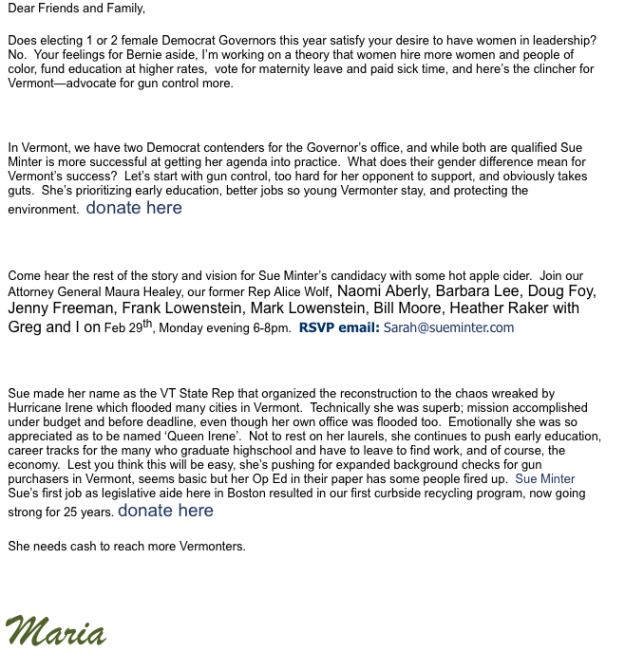 The first paragraph is just badly written. (I’l specifically note the incorrect use of “Democrat” as an adjective. It’s “Democratic”.)

Paragraph two brings the first fender-bender with the truth. “Two Democrat contenders for the Governor’s office”? Maria must think Kesha Ram is running for the top spot. Where was the fact-checking? There’s also quite a bit of overlap between the first two paragraphs, which should have been edited out.

Paragraph three, boilerplate. And then you get to paragraph four, which is the worst-written and wrongest of the bunch. Minter was a former State Rep when she “organized the reconstruction to the chaos wreaked by Hurricane Irene.” (Was that sentence hit by a hurricane?)

And “Queen Irene”? Where the H did that come from? I haven’t heard anyone call her that.

The rest is just sloppy and repetitive. The overall impression is “one step above a Nigerian email scam.”

Maria’s List is real, however. It’s just, from the looks of this letter, not very well run.

But who knows. Maybe Maria’s List will connect Sue Minter with affluent liberals in the Boston area and bring her an infusion of cash. Which would be great. But its communications are downright unprofessional.

Which is probably why Ritner takes such a neutral — nay, distant — posture toward the group. And why the Minter campaign is still working on the real prize: EMILY’s List.

Note: I reached out to Maria’s List before writing this piece; they did not reply.

5 thoughts on “With friends like these, who needs EMILY’s?”