Looks like it’s in the bag. When the State Senate meets Wednesday, it will vote to suspend Norm McAllister, self-admitted sex criminal, from his seat. Not expel him, not allow him to serve, but to consign him (they hope) to political limbo until his criminal trial wraps up — almost certainly after the end of this year’s legislative session, and perhaps after the official beginning of campaign season. (Candidate filing deadline is May 28. Criminal proceedings likely to still be pending. Will Norm file for re-election?)

The rationale: Expelling McAllister might compromise his trial, but we can’t simply let him continue to serve. Which would seem to be a contradiction: he should be presumed innocent, but he’s unfit to serve in the Senate.

It also leaves the people of Franklin County as the real victims. They will lose one of their two state Senators for an entire session, but they will also continue to live with the very real stain of officially being represented by Norm McAllister. Suspension is the convenient way out for the Senate, but it ignores the interests of absolutely everyone in Franklin County — Democrat, Republican, Independent; pro-McAllister or anti. 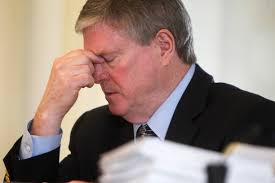 Senate President Pro Tem John Campbell addressed the situation in his usual meandering, impenetrably filibustering style in a podcast interview with VTDigger’s Mark Johnson. As a public service, I listened carefully to the uncontrollable torrent of Campbellian verbiage and, painful though it was, transcribed it for your reading pleasure. (His answer to Johnson’s initial question on McAllister took more than six full minutes. I had to stop transcribing after about five — I simply couldn’t take any more.)

And now, the annotated John Campbell.