It’s Thursday, which means the Burlington Free Press brings us the weekly excretion from the mind of Art Woolf, Vermont’s Leading Economist On Retainer. Woolf’s column is the usual stuff: a handful of statistics and some shallow speculation on What It All Means.

This week’s subject: statistics that show Vermont has a relatively high rate of people receiving federal disability benefits. He points out that this is a drag on the economy, because thousands of potentially employable Vermonters are sitting on their asses collecting gummint checks. Well, he doesn’t say that, but the implication is clear. He begins from the unspoken assumption that we have more than our share of freeloaders. Not that there might be actual reasons for it, or maybe it’s just a statistical fluke; nope, if we have more disability recipients than average, there’s something funny going on.

But that’s not what I’m writing about. No, I’m writing about the photograph that accompanies the column on the Freeploid’s website. Which, as of this writing, is the featured article on the home page. Screenshot below. 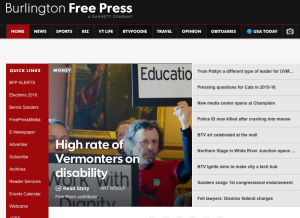 The image is a file photo showing a kinda scruffy-looking guy in a red T-shirt holding up a sign. The photo is cropped so you can’t see the full context, but there’s enough to tell me this much:

The photo was taken at the Statehouse. That T-shirt is the unofficial uniform of the Vermont Workers’ Center. When VWC people go to the Statehouse to lobby lawmakers, they always wear that shirt.

So what are you saying, Free Press? That the Vermont Workers Center should really be called the Vermont Shirkers Center? They’re layabouts, spending their days at the Statehouse while collecting disability? They’re lobbying for more welfare, so they can live more comfortably at the taxpayer’s expense?

Or was the photo just a quick grab out of the file, no slight intended?

I’m sure the photo will be taken down without explanation sometime soon. And I’m sure that if the Free Press chooses to explain (which they almost certainly won’t), they’ll say it was a mistake. But this is the kind of thing that makes people mistrust them.

Update, late Thursday night: The image is no longer on the Freeploid’s home page, but it still accompanies Woolf’s column. For shame.