Or “opportunistic hypocrite,” take your choice.

To reset the stage, House Minority Leader Don Turner yesterday said he would vote for Scott Milne for Governor if the race goes to the legislature, in spite of a century and a half of precedent that lawmakers ought to opt for the top vote-getter instead of, as the Burlington Free Press charitably put it, being “free to vote their consciences.” 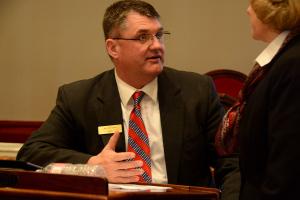 “Let me tell you about my unique personal definition of ‘conscience.'”

To which I can only say, if their consciences lead them to any other conclusion than Peter Shumlin, then either they’re not listening closely enough to that still small voice, or their consciences are on the fritz.

Anyway, I speculated on how Mr. Turner had voted the last time this very question was before the legislature. Well, the answer comes to us courtesy of Terri Hallenbeck, soon to be late of the Burlington Free Press.

Turner acknowledged that’s a different stance than after the 2010 election, when the Legislature ratified Shumlin’s election over Republican Brian Dubie after Shumlin had a plurality but less than 50 percent of the public vote. That year, lawmakers also ratified the results of Republican Phil Scott, who received the most votes but less than 50 percent of the total for lieutenant governor.

Which means that virtually every lawmaker (including Don Turner) presumably voted against his/her political interests, and in favor of established precedent, at least once. Republicans ratified a Democrat, and Democrats ratified a Republican. It’s worked both ways over time. But now, Turner is pulling a brand-new rationalization out of his butt because it suits him politically.

Gee, I thought Republicans were the guardians of traditional Vermont values.

Or, as somebody who was on the short end of this Vermont tradition put it:

Doug Racine, a Democrat who lost the 2002 governor’s race to Republican Jim Douglas in a campaign that was also decided by the Legislature, said Democratic legislators told him at the time they felt compelled to vote for Douglas, who received the most votes in the election. “For a lot of legislators and for Vermonters it became about fair play,” Racine said.

Perhaps “fair play” is out the window for Republicans who suddenly see an unexpected opportunity to grab the biggest prize. In other words, they’re a whole bunch of Gollums.

p.s. We’re starting to get a glimpse at the future of a clickbait-oriented, post-Remsen-and-Hallenbeck Freeploid. Its coverage of Friday’s important developments consisted of two short articles from the Associated Press. Plus, those stories were pretty much buried on the Freeploid’s website, while more pressing matters — the LL Bean grand opening, a ladybug-infested house, a moose shooting — were given due prominence.

And the crudification of the Burlington Free Press is only just beginning.

1 thought on “We have our answer: Don Turner is a hypocritical opportunist”