Earlier this week, State Auditor Doug Hoffer issued a report suggesting that the state is getting shorted on leases of public lands to ski areas. The long-term leases were negotiated in the Good Old Days, when ski areas were not much more than trails, lifts, and lodges. And they reflect that; lease payments are based on lift ticket sales.

Today, ski areas are ski resorts — with myriad amenities and all-season activities. Lift tickets are a small part of the whole. You could argue that that’s because of investments by private-sector operators; you could also say that none of it would exist without the public lands. The AP’s Wilson Ring put it this way:

The [Auditor’s] report says that inflation-adjusted lease payments to the state declined by 14 percent between 2003 and 2013, but property near the ski areas increased in value by about 150 percent, and meals, alcohol and room taxes have increased by between 40 percent and 61 percent.

Is he really trying to tell us that rock-bottom leases are more lucrative for the state than reasonably-priced ones? Like the supply-side assertion that lowering taxes will increase revenue? How well does that work, Sam Brownback?

Of course, Riehle was reaching deep into the bottom of his rhetorical barrel; he also claims that the leases have led to the preservation of land and wildlife.

Yes, big expensive resports are nirvana for the ecosystem.

Hoffer doesn’t necessarily recommend trying to reopen the leases; he just wanted to provide information and raise the question.

It’s a very good question, with the state’s budget circumstances so tight that Gov. Shumlin has proposed leasing prison space to the feds (which will keep more state inmates in out-of-state for-profit prisons) and placing a three-year moratorium on the Current Use program, among many other things, to generate new revenue. His administration is effectively searching all the sofa cushions for spare change.

Nonetheless, it’s safe to assume that Hoffer’s report will be quietly shelved. Michael Snyder, Vermont’s Parks and Recreation commissioner, says the state’s hands are tied until the leases expire.

That strikes me as an awfully defeatist attitude. The state does hold the ultimate hammer — it’s our land, after all — and could force the ski resorts to reopen the deals if it wanted to.

Of course, ski resort operators (Bill Stenger, come on down!) are very well-connected people with top-shelf representation at the Statehouse and deep pockets for campaign contributions. I can just hear Our Lawmakers issuing heartfelt paeans to One Of Vermont’s Iconic Industries, a Bedrock of Our Vital Tourism Sector, and pooh-poohing any talk of Reneging On Agreements Made In Good Faith.

Too bad, ’cause if Shumlin’s budget is any indicator, we could really use the money. The resort industry has it to spare. And I’d say we deserve a fair return for the use of public property.

But naah, it ain’t happening. Better luck with your next report, Doug.

We received a pair of campaign mailers the other day. (One for each Household Voter.)

Which isn’t at all unusual; it’s rush season for political postage, which gives the USPS a nice little bump in bulk mail. But there was an unusual twist to this one. See if you can spot it: 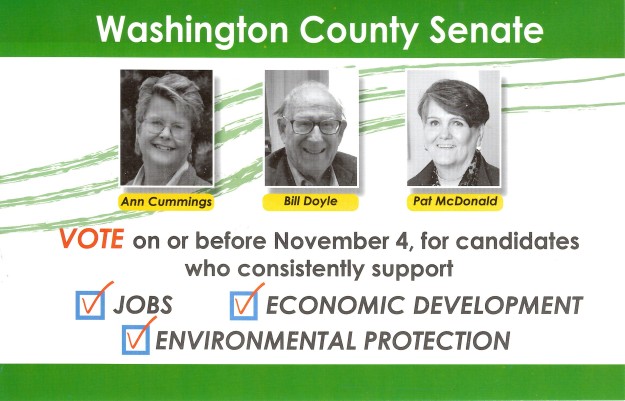 If you didn’t know the players, you’d think this was a standard piece of party-line bumpf. But it’s not.

This mailer, for the three-seat Washington County State Senate district, endorses two Republicans and one Democrat. Ann Cummings is a Democratic incumbent; Bill Doyle, Our Eternal Senator, is a Republican incumbent; Pat McDonald is a Republican challenger.

Who’s missing? Why, none other than Prog/Dem incumbent Anthony Pollina.

You’d expect these guys to promote Republicans, wouldn’t you? Why no love for Republican Dexter Lefavour? Aside from, y’know, the fact that he’s nothing more than slot-filler.

And why Ann Cummings?

A couple ideas present themselves.

— Tony Pollina is the most liberal of the incumbents, and the most vulnerable — having finished in third place in each of the last two elections. Mind you, there was plenty of room between Pollina and the next Republican finisher each time. But McDonald has a high profile and plenty of connections, and the VTGOP has high hopes for her.

I think they’re wrong, but that’s how they see it.

— Ann Cummings is a liberal Democrat, but (a) she’s a longtime incumbent and a strong vote-getter, and (b) well, she’s a Realtor.

I don’t think her profession was the deciding factor in this cunning plan. More likely, it’s a tactical maneuver to try to isolate Pollina as the weakest link. And by listing a popular, established Democratic incumbent plus the immovable Bill Doyle, they might just trick a few liberals into thinking that McDonald is on their “team.”

One more thing. Do you suppose the Realtors checked with Realtor Cummings before sending this mailer? If not, it seems discourteous to me. If so, and Cummings approved it, then she ought to explain herself to her fellow Dems.