The Republicans often (constantly) accuse Gov. Shumlin and the Democrats of irresponsible governance — of taxing and spending without regard for the long term.

Consideration of the tax and budget bills in the House has been marked by Republican gimmickry and short-term thinking. And it looks like we’re in for more next week.

First, House Minority Leader Don Turner’s deal with Speaker Shap Smith, delivering ten Republican votes in exchange for more money for Emergency 911 call centers and the Vermont Veterans’ Home. Thus ensuring the passage of a budget he claims to oppose, and fattening it by more than a million dollars.

Second, Rep. Paul Dame’s unaccountable vote for restoring full LIHEAP funding, in spite of the fact that he opposes all tax increases and wants even deeper spending cuts  — conveniently unspecified — than the Democrats proposed. Which means if we restored LIHEAP, we’d have to cut the money somewhere else — almost certainly in other human-services programs, since that’s the lion’s share of General Fund spending.

Third, Rep. Job Tate, a House freshman who was previously noted for handing out Life-Savers in honor of the Emergency 911 call center staffers whose positions he sought to maintain even while insisting on No New Taxes and More Cuts Elsewhere. Today he resorted to an old chestnut of Budget Theater: proposing a pay cut for lawmakers.

Who, as it is, make a mere pittance for their work. And because their pay is so minimal, the cut would have been minuscule compared to the budget gap. But hey, it would have sent a message, right? Share the pain, right? Yeah, thanks for participating, Mr. Tate.

And then we have Paul Dame, he of the pandering and hypocritical LIHEAP vote, proposing another cynical amendment. The tax bill includes a cap on itemized deductions equal to 2.5 times the standard deduction. Well, Mr. Dame touted an amendment to allow unlimited itemizations for people with incomes under $60,000 a year.

Never mind that pretty much everyone who earns less than $60,000 is taking the standard deduction. It’s virtually impossible to have an income that low and rack up enough deductions to make itemizing worthwhile. It’s an empty gesture aimed at positioning Dame as a friend of the little guy, even as he would force massive cuts in human services programs if he had his way on taxation and budget-writing.

As for next week, one of the big items on the House agenda is the water bill, aimed at sparking cleanup efforts in Lake Champlain and other Vermont waters. The Republicans, natch, oppose any new taxes even while paying lip service to clean water. Indeed, they apparently favor new programs (not that they have any choice, since the EPA would come down on us hard like a criminal if we didn’t act), but want to get the funding from existing sources. Like, oh, maybe scraping the gold off the Statehouse dome and selling it to Cash4Gold.com, or searching the seat cushions for spare change.

Or, in Don Turner’s case, scrounging a little money from existing sources and using it “to leverage bonds.”

I see. So Mr. Fiscal Responsibility wants Vermont to assume a pile of new debt — adding to our long-term fiscal issues — for the sake of avoiding any new taxes right now.

You know, during the House debate we’d occasionally hear a blast of honest, hard-core conservatism. One Representative basically said all those poors should get off their asses and go to work. At least that’s honest, if it’s also ignorant and mean-spirited. But Republicans trying to have it both ways? That’s just sickening.

So this just popped up on Ye Olde Facebooke:

Ahem. This would be the stout conservative Paul Dame who’s been Tweetbragging about his anti-tax votes in the House. And now he’s Facebragging about a vote that would add million bucks to the budget. (Correction: I’ve been told it would have added three million, not six. I guess that makes Dame only 50% of the hypocrite I thought he was.)

Myself, I’m all for maintaining LIHEAP. It’s one of several budget cuts that will hit Vermont’s poor and working poor the hardest. But Paul Dame has no business bragging about a vote to increase spending.

This is part and parcel of the House Republicans’ two-faced game on the tax and budget bills. They’ve fought hard against tax increases and painted the Democrats as the tax-and-spend party, but they’ve also fought against many of the budget cuts proposed by Gov. Shumlin and House Dems. And, as reported earlier, House GOP leader Don Turner negotiated spending INCREASES in exchange for Republican votes on the big bills.

Nice little discovery by the Freeploid’s Terri Hallenbeck: apparently, Dan Feliciano’s had a little trouble with the mechanics of the Secretary of State’s new online campaign finance system, and mistakenly underreported his own donations to his campaign.

Dan Feliciano, the Libertarian candidate for governor, has contributed $30,000 to his own campaign — or nearly three-quarters of his campaign’s money — though that information was unclear on campaign finance reports filed with the state. 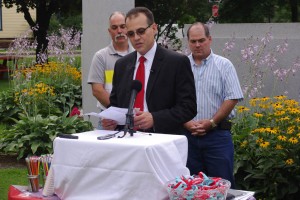 Selling trinkets in the park: a vital cog in the Feliciano money machine.

Add it up: Feliciano has raised less than $10,000 from people outside his immediate family. For the entire campaign.

So the question remains: what happened to the Feliciano groundswell? To, ahem, #Felicianomentum? To judge by his finances, his would-be challenge to the political establishment has been a damp fizzle.

Even the notable Republicans who publicly backed his candidacy, like Brady Toensing and Wendy Wilton and Patricia Crocker and Jim Peyton and Becky Amos and Tom Burditt and Chet Greenwood, don’t appear on Feliciano’s donor list. Mark Snelling gave one gift, a munificent $200. GOP House candidate Paul Dame chipped in $101. Darcie Johnston hasn’t given any money, but she has been acting as Feliciano’s unpaid campaign manager.

Which, judging by her past record, may have a cash value of less than zero.

The point is, the right wing of the Republican Party may have raised their voices for Feliciano, but when it comes to money, they’ve left him to fend for himself.

A great deal was made of Feliciano’s showing in the Republican primary: he took 15% of the vote as a write-in candidate. As a percentage, that’s impressive. But it’s 15% of a very small total: about 2,100 votes. At the time, many thought Feliciano would build on that showing and provide a real challenge to Scott Milne, if not Governor Shumlin.

Now, looking at his financials, I wonder if that 2,100 doesn’t represent a high-water mark. Oh, he’ll probably get more votes in the general election — but he’s not getting anywhere near 15%. I’m beginning to wonder if he’ll even crack the magic 5% number that would give the Libertarians major-party status in the next cycle.

Because considering the latest news about the extent of his self-dependence, his campaign looks weaker than ever.

*For foodies, yes, it was the kind of BBQ where they don’t actually serve any “barbecue.”

While the kids are on the playground, you can enjoy meeting the following candidates who will be on the ballot in November:

The event will include hamburgers, hot dogs, veggie burgers, pasta salad, chips, dessert, and drinks. There will also be several door prizes in addition to a 50/50 drawing!

Okay, fine, nothing wrong there. Standard political fare. Except for one thing: the sign they put up at the entrance.

Which simply says “ESSEX FAMILY BBQ.” Nothing about “Republican” or “Politics” or “Candidates,” or the Essex Republicans, which took home the proceeds. Just a friendly invitation to a “Familiy BBQ.” A passerby could reasonably conclude it was a civic event put on by the town of Essex.

And they had enough room to do it right. All they had to do was shift “FAMILY” down one line, and insert “GOP” below “ESSEX.”

There are two possibilities here. One, that the Essex Republicans couldn’t afford three more letters for their sign. Or two, that they were trying to trick folks into buying tickets. Which implies that these Republicans believe the word “Republican” is a turnoff. Sad.

And on a bright sunny Sunday afternoon, there must have been lots of people using the park. How many fell for the ruse, and wound up paying ten bucks a head for a bunch of political speechifying?

p.s. Notice who’s missing from the rogues’ gallery of candidates? Yeah, Phil Scott, Your Party Leader, once again steering his own course.