As of yesterday afternoon, nearly 20,000 Vermonters had submitted ballots for today’s primary election. The actual number, per Secretary of State Jim Condos: 19,904. With one full day to go. (More than 25,000 voters requested early ballots, so there’s room for the record total to grow.)

The old record was 18,210, set in the year 2010 when we had a red-hot five-way Democratic primary for governor.  So, a healthy pre-primary turnout and one more indication that the concept of “Election Day” is becoming less relevant. (At the bottom of this post, you’ll find a list of primary turnout figures from 2000 through 2014, prepared by none other than Mr. Condos.)

So, let’s trot out the old abacus and see what we might be looking at for total turnout. To err on the side of caution, we’ll assume that no additional ballots arrive before the deadline, 5:00 p.m. today.

If we assume that this year’s early ballots will again be 17 percent of the total, we could project a total electorate of somewhat less than 120,000. Let’s round up, assuming at least a few more ballots arrive today.

120,000 would be a turnout of 26.7 percent. Not quite up to our recent high point of 30 percent in 2000, when Republicans went batshit over civil unions and their primary turnout was spectacular; but substantially higher than 2010’s total of 105,200.

I realize that thinking of 26.7 percent turnout as respectable is a sad commentary on voter engagement, but We Yam What We Yam.

The takeaway is this: primary turnout depends on the quality of competition more than anything else. Our primaries were held in mid-September from 2000 through 2008, then shifted to late August until this year, when it moved to the second Tuesday in August. As the date has changed, turnout has remained consistent: in competitive years it’s healthy, and in uncompetitive years nobody shows up.

There’s been talk of moving the primary back to June, when kids would still be in school and few voters would be vacationing. But honestly, if we did move the primary, we’d probably see the same kind of turnout pattern. It wasn’t better in September; I’m not sure June would make any difference.

Finally, here are the numbers and Condos’ notes. Thanks, Jim. 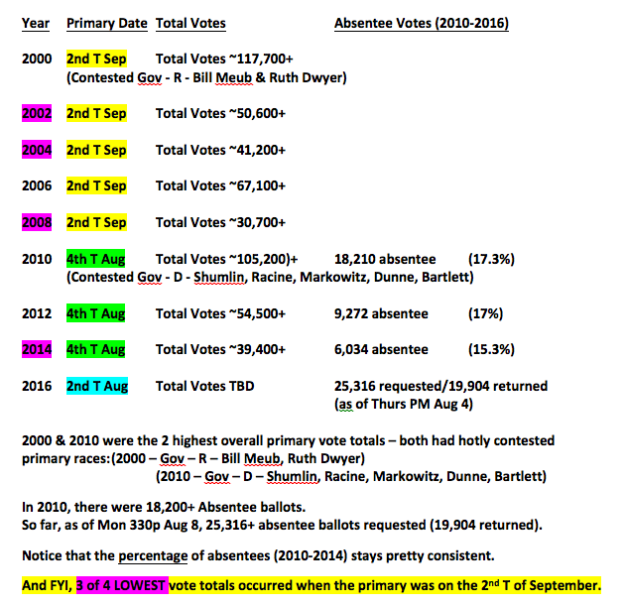