Welp, I forced myself to go back and watch last week’s gubernatorial forum on Vermont’s economic future in a time of climate change, as the organizers dubbed it. And I found something fascinating on the Republican side. As in the way a child is fascinated by turning over a rock and watching the critters disperse.

Candidate A is Bruce Lisman. Candidate B is Phil Scott.

Most of this essay will concern Scott, because (1) his presentation was an appalling mess, and (2) he’s going to win the primary, so Lisman’s brand of environmental unconcern is of little relevance.

But let’s dispose of Lisman first. Although he acknowledges the human causation of climate change, he says “We have a bigger problem” — the weakness of Vermont’s economy. Referring to which, he uttered the following Line For The Ages.

We have an alarm clock that’s ticking away and, frankly, ringing off the wall.

Hm. Yes, of course. The alarm clock is simultaneously ticking away AND ringing. Also, Bruce Lisman nails his alarm clock to the wall. After that warmup, he let forth the line that revealed the depth of his concern for climate change:

Climate is a thing to solve and it’s important, but we have real problems in front of us and we need to get to work enabling a stronger economy.

“Climate is a thing to solve.” Bill McKibben couldn’t have said it better himself. In fact, I’d suggest he call his next book “A Thing To Solve.” Stirring.

Now, on to the main eventer. As Sue Minter pointed out, Phil Scott did take his place in the willfully ignorant ranks of climate change denial.

Yes, I do believe that climate change is real and it could be for many different reasons. …There are many who think it’s caused by human behavior. There are some who believe it’s due to climate change, uh, changing on a worldwide basis.

That last sentence stuttered to a halt like a stock car with a bone-dry fuel tank. But what came before is the real shocker: the self-proclaimed moderate Phil Scott refusing to accept the scientific evidence on climate change, and resorting to the tiredest trick in the conservative playbook: the false equivalency.

So is Phil Scott actually more conservative than his political image? Or is he shifting his rhetoric to better accommodate the broader Republican worldview?

Either one is troubling. I suspect it’s a little of both. This is, after all, a man who endlessly talks of how his political involvement began when he was a small business owner upset over the restrictions of Act 250. This is also a man who’s made his bones in the construction business. I don’t know why we’d expect him to favor environmental concerns over growth and development. 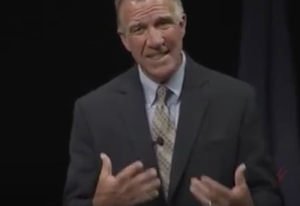 Rhetorical constipation: the inability to emit a complete sentence without excessive straining. If left untreated, may result in throat hemorrhoids.

The other big takeaway from watching his performance was this: he’s a lousy public speaker. There’s a lot of word salad, a failure to finish one thought before moving on to another, and another, and another. There are sentences and paragraphs that simply don’t make sense.

First example, his full answer on climate change. I offered an excerpt above; here’s the whole thing.

Many of us, we should all be able to agree with energy independence. Reducing our reliance on foreign oil and fossil fuels is so essential to our future. And things that we can do ourselves. You’re doing it here in Rutland, we’re doing it in Vermont in many different ways with the solar ah industry, uh wind generation I don’t think is the answer, but solar ah could be the future, and done well, sited properly with local input.

That’s some of the future that we look forward to, to cut down the cost, the affordability crisis that we face today could be, could be solved with us taking care of ourselves in many different ways.

Again, he ran out of gas before the finish line. He needs more pit stops, or a bigger tank. (Or, acting greenly, a hybrid.)

Just look at that last paragraph. What in God’s name is he trying to say there?

Not that public speaking is the be-all, end-all, but does this inspire confidence in Phil Scott’s ability to lead?

When asked if there are ways for Vermont to grow the economy by “adapting to and mitigating climate change,” Scott offered the following unholy mess.

Look at what we’ve done with the solar industry in particular. If we just paid attention as a government to helping all businesses the way we’ve helped the solar industry, look how they’ve grown. But it’s all due to tax incentives. Those are the ways that have grown that sector of our industry.

So first of all, we need to get our house in order. We have lo live within our means as a state government. We can’t spend more than we’re taking in like we’ve done for the last six or seven years. And that’s the first order. Predictability. certainty in government is something that will attract many businesses to Vermont, but we have to get our own house in order first.

The first paragraph is the least incoherent, and after reading it repeatedly, I can’t tell whether he’s for or against incentives for green industry.

From there, he stumbles ungracefully, like the guy slamming down the hall in the A-Ha video, back to his predigested talking points on affordability and reining in state government.

Okay, one more, and then I’m calling Kevorkian on this exercise.

The candidates were asked if they support Vermont’s goal of fulfilling 90 percent of its energy needs from renewable sources by the year 2050. Bruce Lisman had the honesty to come out and say “no.” Scott? Fasten your seat belt, it’s going to be a bumpy ride.

I believe we need goals. I think they’re essential to how we look at things. I look at the state of Vermont and its population challenges and I set a goal of reaching 700,000 in the next 15 or 20 years. That’s a goal.

I think energy independence is a goal, and it can be attainable if we play our cards right. And in a lot of respects, if you look back at how far we’ve come technologically in the last 20 years, it’s astounding. And the game changer, the big game changer, will be when we are able to store renewable energy efficiently. And it’ll be through battery storage of some sort, it’s starting right now. We’ve seen it on a small scale. It’s going to have to be bigger in nature in order for renewables to make sense.

If technology changes, which I’m confident it will, we’re innovative by nature, I think Vermont could play a part in that, too. I think that, ah, the future is bright for us, ah, if we again can gain some consensus, pull together, ahh, in the same common way.

He answers a question about Vermont’s renewable energy goal, and his answer is “Goals Are Good.”

I still think Scott’s the front-runner, but I’m seriously beginning to wonder about his ability to withstand the rigors of a full campaign. If I were a Republican, I’d be worried about his prospects in a series of one-on-one debates with the Democratic nominee, whether it’s Matt Dunne or Sue Minter — who, to judge by her performance in the Rutland forum, has put some serious time into improving her public speaking skills.

Phil Scott needs to do the same, and right quick.

3 thoughts on “A curious duality of nothingness, and a rhetorical faceplant”