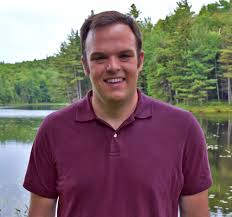 The Candidate, in the obligatory Vermont landscape setting.

Last Saturday, after the Democratic State Committee meeting, I got the chance to sit down with Brandon Riker, who is (I think) the only declared candidate for Lieutenant Governor of Vermont. (See campaign website here.)

The 28-year-old Marlboro resident made waves on July 15, when he reported a campaign warchest of over $100,000. Granted, 90% of that came from himself and his family, but it made a statement of serious intent.

Quick impression: he’s energetic, full of ideas, and wants to make a difference. Whether that and a self-financed campaign will get him anywhere is another question. For him, unlike most candidates, raising the money was the simple part. Now he has to make a name for himself in Democratic circles, build an organization, attract support across the state, and almost certainly fend off some better-known Democrats in what promises to be a lively Lite-Gov primary.

Riker may be young, and may never have run for office before, but he cites more than a decade of political experience:

I’ve campaigned for progressive causes since I was 16 years old. John Kerry, Barack Obama, Jon Tester [in Montana], Mark Begich [in Alaska]. I’ve wanted to work on the hard races — the ones critical for Democratic control. It’s been 14 years since a Democrat was Lieutenant Governor, and we haven’t mounted a serious challenge in years.

Which is true, but probably won’t be true in 2016. With incumbent Phil Scott persistently hinting at a run for governor, top Democrats are sniffing opportunity. We’ve heard names like Senate President Pro Tem John Campbell and Senate Majority Leader Philip Baruth, among others, as possible candidates (as well as Senate Minority Leader Joe Benning on the Republican side). That would seem to put Riker at a huge disadvantage in terms of name recognition and established credibility among Democratic voters and donors.

When asked about his chances in a potentially crowded field, he says: “I’m not looking at this as a competition, but as an expression of ideas. This office can champion ideas.”

As for those ideas, Riker’s top priority is what he calls a progressive approach to economic growth. He sees Vermont heading in a bad direction, which fuels his decision to run now rather than biding his time:

We’ve lost 10,000 workers in the last five years. Our median income has fallen by about $5,000. That has created a tax squeeze, which is causing our budget shortfalls. … Aside from the Chittenden area, every county in Vermont is shrinking.

He outlines what he sees as a progressive approach to job creation: “We can’t compete with other states on tax breaks; we must compete on our strengths.” One of our biggest is “quality of life,” he says.

Riker doesn’t eschew tax incentives as a means to growth, but he wants them to be “properly crafted” — aiming at high-paying technology jobs, and at lower-paying jobs with good benefits packages. The latter would be beneficial to working-class communities.

He also wants to see improvements in our education system, starting with full-day universal pre-K. The current state mandate, he says, calls for 10 hours per week of pre-K. He sees early education as key to creating opportunity. In higher grade levels, he would emphasize expanding access to advanced and specialty classes.

Instead of consolidating schools, he says, we could have specialty teachers serve multiple schools with a “block scheduling” approach. Distance learning could bring advanced courses to small schools. “Online classes are not idea, but they’re a lot better than nothing.”

Riker says the state’s program of allowing high-schoolers to take college courses isn’t truly available to all. “Access to college classes doesn’t work for students too far from a college campus.” Distance learning, again, could fill that gap.

Riker emphasizes universal broadband access as key for creating opportunities across Vermont. He unfortunately cites the inaccurate FCC study in making his point, but he has a point nonetheless. As FCC Chairman Tom Wheeler said in the introduction to that report, “Broadband connectivity can overcome geographic isolation and put a world of information and economic opportunity at the fingertips of citizens in even the most remote communities.”

Riker is critical of state government on modernizing its information technology, including the Vermont Health Connect “disaster, which has taken too long to fix.” He isn’t necessarily opposed to killing VHC and going with the federal website, but only if a Democrat wins the Presidential race in 2016. That, he believes, would ensure the future of Obamacare.

Finally, I asked Riker about his family’s business. Brattleboro-based Teucrium Trading offers investment funds in commodities futures. Two of their funds are in sugar and corn futures — which might not be terribly palatable to liberals who don’t like Big Agriculture and Big Sugar, or who fought for a sugar-sweetened beverage tax.

Riker’s explanation is a bit insider-y, and may not be convincing to the skeptical. “We are not commodity traders,” he said. “It’s a passive benchmark of futures contracts. It’s price agnostic.” And, he says, “Our holdings and trades are all transparent. You can see them on our website.”

Price agnostic or no, I think some will see Teucrium as offering wealthy investors a way to make money off the more excessive elements of American agriculture.

I don’t see this as a campaign-killer; If people like Brandon Riker and his message, they will support him. But it is one more thing he will have to address. And, family money notwithstanding, he’s likely to face an uphill battle for the nomination. He will, if nothing else, have the resources to inject his ideas into the campaign.