Susie Hudson is still going to Israel on a trip paid for by the American Family Association, the far-right Christianist organization. She sees nothing wrong here.

Hudson, a resident of Montpelier and newly-elected secretary of the Republican National Committee, is one of many RNC members going on a nine-day trip to Israel paid for by the AFA and guided by AFA leaders. The trip made news when the Israeli news outlet Haaretz reported the many bigoted comments by longtime AFA spokesman Bryan Fischer. In response, AFA fired Fischer as its spokesman — but retained him as a talk-radio host.

Yep, they’re still paying the guy for equating Islam with Ebola, asserting that the First Amendment only applies to Christianity, and that gay Nazis were responsible for the Holocaust because homosexuals are inherently savage.

He may not be their spokesman, but as a talk radio host, he remains their public face. And they’re happy to pay him for that. Plus, his comments were barely outside the usual poisonous stream of AFA demagoguery.

After I revealed Hudson’s travel plans in this space, Seven Days‘ Paul Heintz reached Hudson, and she gave him a heapin’ helpin’ of weaksauce.

Okay, stop right there. Fischer is still with the organization, still holds a prominent position. His public statements have arisen from his radio show, not from his duties as AFA spokesman. If they wanted to punish him, they’d take away his media platform.

But, she said, “I did not know that whatever group you said has called them a hate group.”

Wow. Just wow. That’s an almost Palinesque cavalcade of ignorance. Now, I’m sure Ms. Hudson is just acting stupid to avoid taking a stand on the AFA, but I’d expect someone in her position to do a better job than that.

“Somewhat familiar” with the American Family Association, a leading power-broker on the Christian Right? “Whatever group you said”? Yeah, just the Southern Poverty Law Center, one of America’s leading crusaders against hate groups for more than 40 years. “Stuff that’s been out in the press”? In the words of Katie Couric, what newspapers do you read?

To top it all off, “Hudson… repeatedly declined to say what she understood AFA’s beliefs to be.”

Come on. That’s not credible at all. The Republican Party’s top officials have to know the lay of their land. That includes groups like the American Family Association, who have a lot of influence in Republican politics.

There, of course, is the rub. Hudson can’t afford to publicly distance herself from the AFA because it is so influential. And because AFA members and sympathizers form a substantial part of the Republican base, even in liberal old Vermont. She’d rather come across as an uninformed dunderhead than utter a word against the AFA and the extremism it stands for.

Which brings us to the Vermont Republican Party itself. VTGOP leaders like to downplay social issues, but they don’t want to actively contradict the views of the Christian Right. No matter how extreme, hateful, and downright unAmerican those views might be.

At the January 27 meeting of the House Ways and Means Committee, Sara Teachout of the Joint Fiscal Office distributed three fairly simple charts that tell the story of our unfair state income tax system in bold relief. I’ll be examining those charts in an upcoming post, but right now I want to focus on a small slice: the deduction for medical expenses.

The first chart lists the most frequently claimed tax deductions across the top, and income classes down the left side. It tells a fascinating story about who benefits from which deductions, and how much. But today I’m concentrating on the first two columns, shown below: 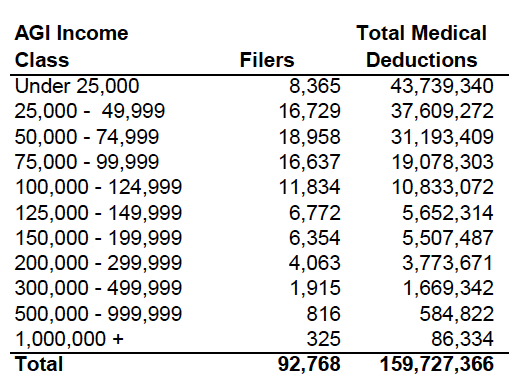 A couple of explanatory points. First, this data is from 2011, predating Vermont Health Connect and the Affordable Care Act. Second, I should explain the rules for deducting medial expenses. You can’t deduct health insurance premiums, just actual medical and dental expenses. You can only deduct medical expenses if they total more than 10% of your gross income, and only the portion above 10% is deductible. It’s a very high standard; you’ve gotta have some serious medical bills and no insurance (or really bad insurance) to qualify.

As you might expect, “Total Medical” is the outlier among deductions; it’s the only one claimed more often by the poor and working poor than by the wealthy. There are two simple reasons for this. The first is that the poorer you are, the less likely you are to have health insurance. The second, obviously, is the lower your income, the fewer bills it takes to qualify.

It’s no giveaway, though; if you’re making $25,000 a year, then medical bills over $2500 are enough to throw you into severe financial difficulties. A tax break on a portion of those bills won’t make you whole.

These columns reveal the hidden cost of our old health care system — the human and social cost, and the actual financial cost. Vermont is foregoing a large amount of potential tax revenue because so many people incur medical bills that eat up a significant portion of their earning power.

I don’t know if these numbers were factored into Gov. Shumlin’s calculations on single-payer. I sure as Hell hope so, because it’s a cost that’s every bit as real as a payroll tax.

As for the human and social costs, the top three lines indicate that more than half the total value of medical deductions was taken by those with incomes under $50,000. These are people who cannot afford a significant unplanned expense, because they’re barely making ends meet in good times.

Here’s the same slice from a second chart that shows the total number of filers in each income class, and the number who took a medical deduction. This shows that more than 50% of those claiming a medical deduction earned less than $50,000, while virtually no wealthy people claimed one. 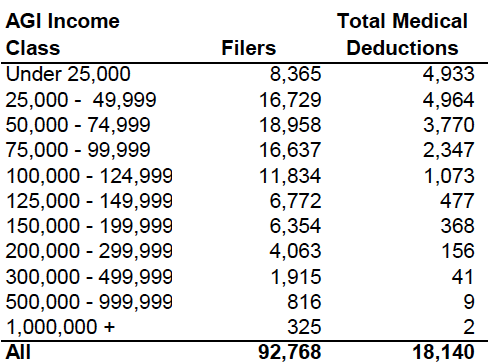 Now look at that top line. More than half the low-income filers qualified for medical expense deductions. That’s nearly 5,000 individual stories of illness and deprivation, of life-changing financial crises, most likely including thousands of bankruptcies. How many people lost their jobs and their homes, and saw their lives go into a tailspin, because of an uncovered illness or injury in 2011 alone?

So far, health care reform has dramatically reduced the ranks of the uninsured in Vermont. These figures show how crucial that progress is, for the stability of our society and the very lives of our most vulnerable.

These figures are also a powerful argument that we need to keep it up. We shouldn’t have thousands of poor and working-class Vermonters qualifying for this deduction. There should be none, or very few at most. That’s the goal of, and the moral imperative for, universal health care.